Smokers quit at highest rates in over a decade 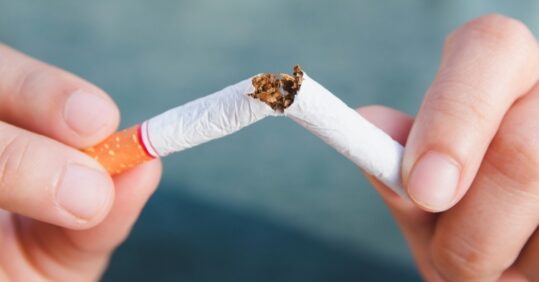 The number of smokers who have quit in the last year is at its highest in more than a decade, new figures show.

The data from University College London (UCL) Smoking Toolkit Study, show there has been an increase of almost two thirds in the quitting success rates of smokers in England in 2020. A rise in quit attempts has also been seen, up by nearly a quarter since 2019.

The team at UCL has been asking 1,700 people in England every month about their smoking habits since 2007, as part of the long-term study.
Professor Jamie Brown, director of the UCL Tobacco and Alcohol Research Group and a member of the Smoking Toolkit Study team, said: ‘Evidence shows that many more smokers are trying to quit in 2020 and the highest numbers are succeeding since at least 2007. While the evidence on Covid-19 outcomes for smokers is still developing and remains uncertain, what is clear is that stopping smoking brings rapid improvements in respiratory and cardiovascular health’.

He added: ‘Quitting now will not only benefit people’s individual health and help improve their lung health ahead of flu season, but it will also help to reduce the demands on the healthcare system in these difficult times’.

The new findings come as Public Health England launch ‘Stoptober’, their annual national campaign to encourage all smokers to quit smoking during the month of October.

Stoptober 2020 will sit alongside the ‘Better Health’ initiative launched by PHE in July 2020. According to PHE, Better Health aims to help people undertake a ‘health reset’ and encourages healthy behaviour choices around smoking, diet and exercise, in light of the Covid-19 crisis.

Jo Churchill, public health minister said: ‘It has never been more important to take care of ourselves, and quitting smoking is a great way to start. With smoking rates already at an all-time low and 2020 seeing more people stopping than ever, I urge all smokers to join in Stoptober to improve their health and help England become a smoke-free society by 2030’.

PHE report smoking prevalence among adults in England at a record of low of 13.9%.