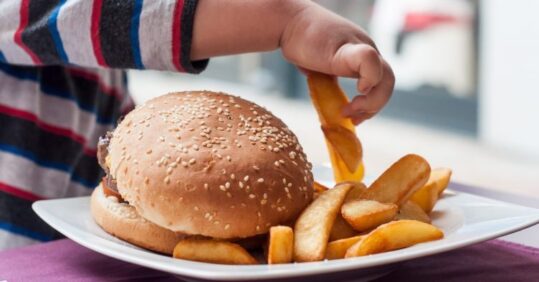 Television adverts for foods high in fat, salt and sugar will not be allowed between 9pm and 5.30am across the UK from the end of next year, the Government has announced.

The ban will only apply to food of ‘most concern’ to childhood obesity, as part of the Government’s ongoing strategy to tackle the problem. This means products such as honey, olive oil, avocados and marmite will be excluded from the restrictions.

It follows a public consultation where 79% of respondents supported a 9pm watershed. A further 74% agreed with introducing further advertising restrictions online, which is also restricted in the new rules.

Public health minister Jo Churchill said: ‘The content youngsters see can have an impact on the choices they make and habits they form. With children spending more time online it is vital we act to protect them from unhealthy advertising.’

The Government estimates there were around 2.9bn child unhealthy TV ‘impacts’ and 11bn impressions online, which are defined as someone seeing a single advert one time, in the UK in 2019.

Evidence shows exposure to unhealthy food advertising can impact when and what children eat, it added. Analysis also found 47.6% of food adverts shown in September 2019 on ITV1, Channel 4, Channel 5 and Sky One were for unhealthy foods, rising to nearly 60% between 6pm and 9pm.

Covid-19 further highlighted how important it is to tackle obesity, with excess weight being a risk factor for more disease, the Government added.

The restrictions will apply to all businesses with 250 or more employees that make or sell unhealthy foods.

She added: ‘This is a landmark, evidence-based policy, and these new restrictions will stem the flood of adverts on TV and online that entice us towards sugary and high fat foods, making space to advertise healthier foods.’

The National Audit Office said in September last year that Government efforts to reduce childhood obesity needed ‘greater urgency’, with rates in the UK among the worse in Western Europe.

Last year, the Government announced the Office for Health Promotion, which will launch fully later this year and is intended to tackle obesity and improve mental health.

Nursing in Practice looked in-depth this month at whether lessons from the Covid crisis could help the latest obesity strategy succeed where others have failed.

One in three children leave primary school overweight or obese, with obesity-related illnesses costing the NHS £6bn a year.