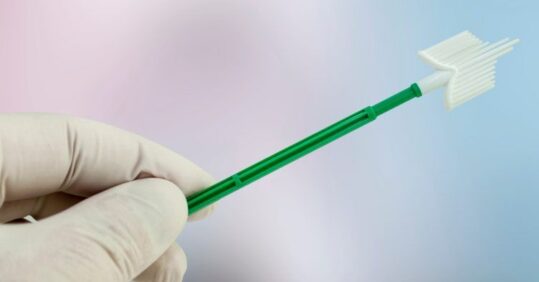 The study of 1.3 million women in England provides evidence that a longer gap between smear tests where HPV has not been detected, prevents as many cancers as screening at three-year intervals, even if women are not vaccinated against HPV.

Published in the British Medical Journal and funded by Cancer Research UK, the findings show that testing for HPV first can reduce the risk of developing dangerous cervical lesions and cervical cancer by half in women aged 24-49 years old.

Researchers from King’s, the University of Manchester, and the NHS analysed data from the NHS Cervical Screening Programme in England. They followed people attending screening for two rounds. The first screening was between 2013-2016, with a follow up by the end of 2019.

Lead author Dr Matejka Rebolj, from King’s College London, said: ‘These results are very reassuring. Changing to five-yearly screening will mean we can prevent just as many cancers as before while allowing for fewer screens.’

She added: ‘This builds on findings from years of research showing HPV testing is more accurate at predicting who is at risk of developing cervical cancer compared to the previous way of testing. As changes to the screening programmes are made, they will be monitored to help ensure that cervical screening is as effective as possible for all who take part.’

This comes after people missed their cervical screening appointment were urged to contact their GP practice in February this year, after data revealed nearly a third of those eligible did not come forward in 2020 to 2021.