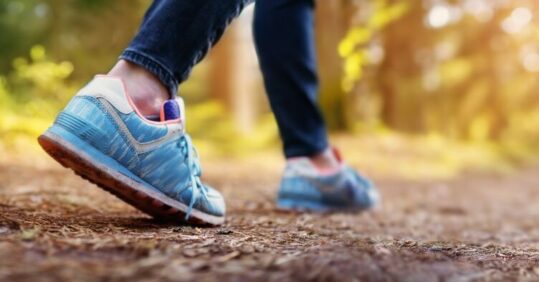 Walking 10,000 steps a day has been shown to be the optimum goal for adults, but pace also matters, research has suggested.

However, the researchers found the intensity of steps taken was just as important as the number of steps.

The work, which is the first to objectively track step count in relation to health outcomes, is published in JAMA Internal Medicine and JAMA Neurology.

Wearable activity trackers were used to monitor the number and pace of steps taken by 78,500 adults over a period of seven days, for a minimum of three days. The activity tracking included a weekend day and also monitored participants’ sleep periods.

Achieving 10,000 steps a day was associated with a lowered risk of dementia, heart disease, cancer and death.

For every 2,000 steps taken daily, the researchers found that the risk of premature death, risk of cardiovascular disease and cancer incidence, was lowered incrementally by around 10%, up to ten thousand steps.

A higher number of steps per day was also associated with a lower risk of dementia, with the risk reduced by 50 percent if the 9800 steps were taken. At lower step counts, the risk was also reduced.

‘For less active individuals, our study also demonstrates that as low as 3 800 steps a day can cut the risk of dementia by 25 percent,’ said co-lead author Associate Professor Borja del Pozo Cruz from the University of Southern Denmark.

However, a faster stepping pace, such as a power walk, showed benefits beyond the number of steps achieved for all outcomes in dementia, heart disease, cancer and death.

‘The take-home message here is that for protective health benefits, people could not only ideally aim for 10,000 steps a day but also aim to walk faster,’ said co-lead author Dr Matthew Ahmadi from the University of Sydney.

Because step count is easily understood and widely used by the public to track activity levels, the researchers hope that this research will not only help people to think about the pace of their steps but will also help policymakers design effective public health programmes to help prevent chronic disease.

This comes after a UK expert consensus statement advised that people with osteoporosis should be encouraged to exercise more to strengthen bones, improve posture and reduce falls risk.