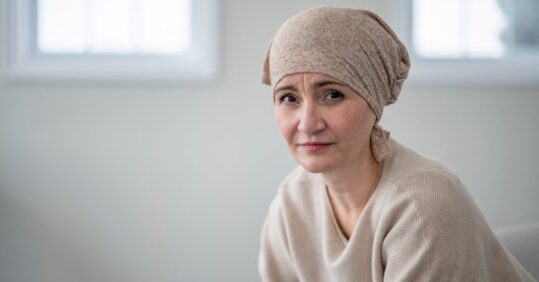 A combination of targeted drugs shrunk tumours in half of patients with a rare form of ovarian cancer in an early clinical trial.

The research, led by a team at The Royal Marsden NHS Foundation Trust (RMFT) and The Institute of Cancer Research (ICR) in London, tested the drugs – called VS-6766 and defactinib – in 25 patients with low-grade serous ovarian cancer.

Overall, 46% of patients saw their tumours shrink significantly in response to the treatment. But this rose to 64% among those who had a mutation in a gene called KRAS – suggesting that tumour profiling could be used to identify patients most likely to benefit from the new drug combination.

KRAS is one of the most commonly mutated genes in cancer, found in one quarter of all tumours. Until recently KRAS-driven tumours were extremely difficult to treat.

‘I am delighted that this drug combination has worked so well in a group of patients who are in urgent need of new treatments… We’re very hopeful that this could become the standard of care for women with low-grade serous ovarian cancer.’

RMFT researchers had recently discovered that VS-6766 remains active in the body for extended periods and can be given twice a week to treat tumours while minimising side-effects. Patients in the trial also received defactinib twice daily.

Low-grade serous ovarian cancer tends to develop at an earlier age than other types of ovarian cancer. Less than 13% of patients respond to chemotherapy and less than 14% to hormone therapy.

MEK inhibitors – which block the cancer’s RAS-RAF-MEK-ERK growth pathway – are already used to treat low-grade serous ovarian cancer and can cause tumours to shrink in around one in four patients. However, they tend to stop working as tumours develop resistance to treatment.

Researchers are hoping using VS-6766, a dual RAF/MEK inhibitor, in combination with the drug defactinib could offer a new treatment option for patients and avoid drug resistance. Defactinib is a FAK inhibitor, which is also involved in the cancer’s growth pathways.

The results of the trial were presented last Sunday at the 2021 European Society for Medical Oncology Congress. A phase II trial lead globally by Dr Banerjee is now recruiting to further test the effectiveness of the combination.

Aspirin is also being trialled as part of a treatment for an aggressive form of breast cancer, when combined with immunotherapy, in a separate study led by Dr Anne Armstrong from the Christie NHS Foundation Trust in Manchester.