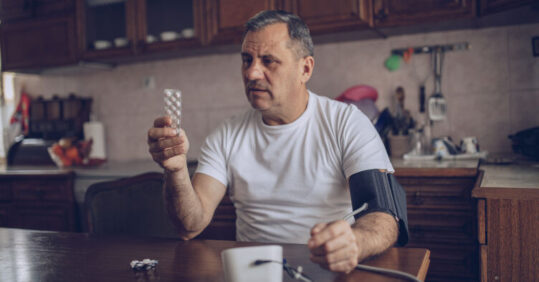 A catch up in new hypertension diagnoses is needed after almost half a million patients may have missed out on starting blood pressure lowering treatment during the pandemic, researchers have suggested.

An analysis of prescription data from England, Scotland and Wales between March 2020 and July 2021 showed that 491,306 fewer people than expected started taking blood pressure lowering medication.

By the first half of 2021, on average, 27,070 fewer people started taking blood pressure lowering medication each month when compared with prescribing rates in 2019.

In the same period, they found that 16,744 fewer people started statins each month.

If, in those ‘missing’ patients, hypertension was to remain untreated over their lifetime, it could lead to more than 13,500 additional cardiovascular events, the researchers reported in Nature Medicine.

Although the figures showed some recovery in dispensing of medications from the initial decline after the first lockdown, first detection of cardiovascular risk factors has not returned to pre-pandemic levels, the prescribing analysis suggests.

By contrast use of medications to treat type 2 diabetes increased by 623 patients per month in the first half of 2021, the analysis showed.

This could reflect a greater awareness of type 2 diabetes due to it being a Covid risk factor or an increase in new-onset disease in the population, the researchers suggested.

They said it may be that after an initial drop off, there is now a ‘catch up’ in diabetes diagnosis.

The findings highlight the need for the NHS to identify and treat those with high blood pressure, they concluded.

Identifying those who missed out on hypertension treatment within five years would reduce the total number of cardiovascular events to just over 2,700, they estimated.

‘The NHS has already taken important and positive steps towards identifying people with high blood pressure as early as possible.

‘However, we need this focus to be sustained in the long-term to prevent any increase in heart attacks and strokes which will add to a healthcare system already under extreme pressure.’

While the findings focus on the UK, the picture is likely reflective of other similar health economies and ‘paints a sobering picture of CVD health in the coming years if it is not addressed’, they wrote.

Professor Sofat added: ‘Despite the incredible work done by NHS staff, our data show that we’re still not identifying people with cardiovascular risk factors at the same rate as we were before the pandemic.

‘Detecting these risk factors early and beginning medication where appropriate is crucial to manage them, helping more people to avoid a preventable heart attack or stroke so they can live in good health for longer.’

Professor Azeem Majeed, professor of primary care and public health at Imperial College London said: ‘The findings show the importance of the diagnosis and management of long-term conditions such as high blood pressure.

‘There is discussion, for example, on suspending QOF to allow more focus on acute conditions.

‘We need to manage long-term problems as well as acute problems. It’s therefore essential that the NHS is resourced to do this to prevent longer-term problems accumulating.’