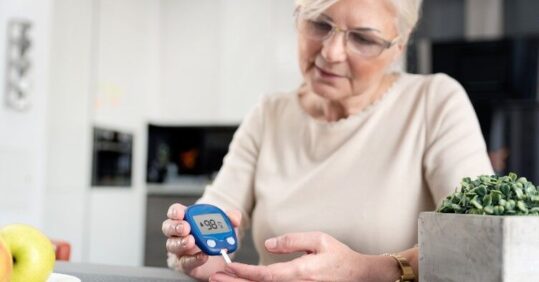 People with type 2 diabetes develop other chronic health conditions more frequently and at an earlier age than other adults, a large UK observational study has suggested.

Using the UK Biobank and the UK Clinical Practice Research DataLink, University of Cambridge researchers analysed data from 3 million adults, with an average age of 50 years, to determine differences in health between those with and without type 2 diabetes.

Looking at 116 long-term health conditions commonly seen in the middle-aged, they found people living with type 2 diabetes had an increased risk of almost half of these conditions, compared with people without diabetes.

The analysis, presented at the Diabetes UK Professional Conference, showed that on average, people with type 2 diabetes developed these chronic conditions approximately five years earlier than people without diabetes.

Researchers included conditions affecting major organs as well as some cancers, but did not look at any infectious diseases or conditions caused by diabetes, such as diabetic retinopathy.

The highest risk was observed for conditions related to the genitourinary system, neurological system, and the eyes, where people with type 2 diabetes had more than two times the risk of developing related conditions.

‘[It] is a stark reminder of the extensive and serious long-term effects of diabetes on the body,’ she said.

The conference also heard full data from the ReTUNE trial confirming that people with type 2 diabetes who are not obese (BMI <27kg/m2) can achieve remission by losing weight on a low-calorie diet.

Of the 20 people with type 2 diabetes in the trial, 14 or 70% went into remission during the 12-month study, defined as HbA1c of less than 6.5% for at least three months and off all diabetes medication.

An average weight loss of around 8% bodyweight was required for remission, the study found, with researchers saying the key was fat loss from the pancreas and liver.

Previous research showing overweight and obese people with type 2 diabetes could reverse the disease by losing weight prompted the roll-out of an NHS England ‘soups and shakes’ diet programme for these patients, with the scheme expanded to another 11 areas of England earlier this year.

Looking at the records of nearly 11,000 women who were diagnosed with gestational diabetes, University of Leicester researchers found that during an average five-year follow-up, South Asian women were nearly twice as likely to develop type 2 diabetes when compared with white women.

Commenting on the findings, Dr Robertson said the research added to the body of evidence showing that people from ethnic minority backgrounds too often have poor diabetes outcomes.

‘Gestational diabetes, and long-term ill-health following it, aren’t inevitable outcomes of pregnancy for Black and South Asian women. Health inequalities that persist in diabetes care must be addressed by the research and healthcare community,’ she said.

It comes after the news that all type 1 diabetes patients will become eligible for real-time or ‘flash’ glucose monitors, according to NHS England.