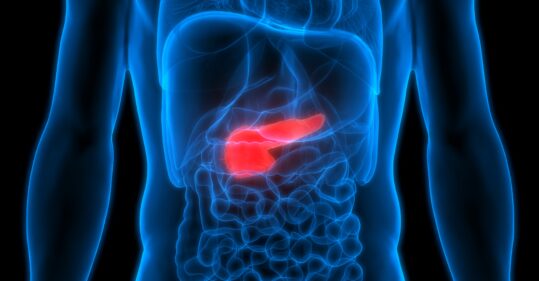 The pancreas returns to near-healthy volume and shape in people after two years in remission from type 2 diabetes, research funded by Diabetes UK has found.

The study found that the pancreas returned to almost normal size in people with type 2 diabetes who were still in remission two years after taking part in a low-calorie diet trial.

Professor Roy Taylor of Newcastle University, who led the work, said the findings ‘will be enormously encouraging, motivating and reassuring’ for people with type 2 diabetes ‘to learn that their small pancreas can return to normal size’.

In people with type 2 diabetes, the pancreas is around 20% to 30% smaller and more irregular than in those without the condition. Previously, it was unclear whether the smaller pancreas was reversible.

The findings followed the Diabetes Remission Clinical Trial (DiRECT) trial, led by Newcastle and Glasgow Universities, which involved 298 individuals with type 2 diabetes put on a diet of no more than 850 calories a day, aiming to lose 15kg.

The same researchers used MRI scanners to follow 64 participants from the DiRECT trial, finding that the pancreas returned to almost normal size, the irregular borders became normal and the amount of fat in the pancreas dropped, for those in remission.

In people who didn’t go into remission, the pancreas didn’t increase in volume to the same extent and there was very little change in pancreas shape, it also found.

The study is the first evidence that remission from type 2 diabetes can return the pancreas to a healthy size and shape.

Diabetes UK said the work highlights the importance of weight loss – specifically of 10-15kg – in bringing about remission.

The charity’s director of research Dr Elizabeth Robertson said: ‘These new findings help to build a clearer picture of the biology behind remission, and how the health of the pancreas can be restored by weight loss.

‘However, we still have questions to answer, such as why remission isn’t possible for everyone… It is key that we continue to explore these questions to make remission a possibility for as many people as possible.’

Last month, scientists suggested Covid-19 could be linked to the onset of type 1 diabetes in the UK after finding that cases almost doubled in some London hospitals during the pandemic compared to normal.