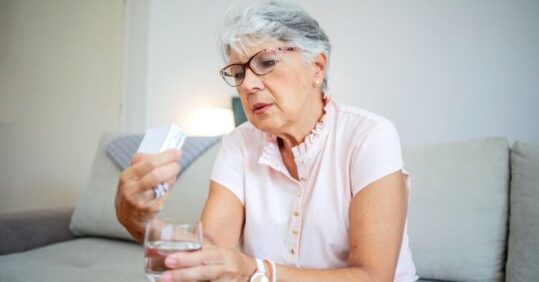 Hormone replacement therapy (HRT) introduced early in the menopause journey could help prevent Alzheimer’s dementia in women who are at a high risk of developing the disease, new research suggests.

The use of HRT was associated with better memory, improved cognition and larger brain volumes in women who carried the APOE4 gene – the strongest risk factor gene for Alzheimer’s disease.

The research teams from the Universities of Edinburgh and East Anglia found that HRT was most effective when it was introduced early in the menopause journey, during the perimenopause.

The study is published in the journal Alzheimer’s Research and Therapy.

Dementia risk is higher in women than men, and more than two-thirds of Alzheimer’s disease patients are women. The disease occurs with a higher frequency in women due to the decline in the hormone oestrogen, which happens during menopause and can accelerate the onset of diseases related to the nervous system.

The researchers studied data from 1,178 women participating in the European Prevention of Alzheimer’s Dementia (EPAD) initiative. The EPAD spanned ten countries and was set up to explore participants’ brain health over time, tracking participants’ brains from ‘healthy’ to a diagnosis of dementia in others.

All EPAD participants over 50 and dementia-free were included in the study, and the results of cognitive tests and MRI brain neuroimaging tests were examined. Because cognitive performance and lower brain volumes are good predictors of future dementia risk, the team did not look at dementia cases. The data was then analysed to determine the impact of HRT on women carrying the APOE4 genotype.

The findings ‘comprehensively’ show that for women at risk of dementia, HRT use is associated with better memory and larger brain volumes.

Professor Anne-Marie Minihane, from the University of East Anglia (UAE), said: ‘We know that 25 per cent of women in the UK are carriers of the APOE4 gene and that almost two-thirds of Alzheimer’s patients are women. In addition to living longer, the reason behind the higher female prevalence is thought to be related to the effects of menopause and the impact of the APOE4 genetic risk factor being greater in women. We wanted to find out whether HRT could prevent cognitive decline in at-risk APOE4 carriers.’

She added: ‘The benefits were particularly evident when HRT was introduced early – during the transition to menopause, known as perimenopause.’

Dr Rasha Saleh, also from the UEA, said the findings were significant because there have been minimal drug options for Alzheimer’s disease over the last 20 years, and there is an urgent need for new treatments.

She said: ‘The effects of HRT in this observation study if confirmed in an intervention trial, would equate to a brain age that is several years younger.’

The study showed a tangible benefit of using HRT to aid cognition and reduce brain changes in those at high risk of dementia. The researchers hope to see these initial findings replicated in other populations.