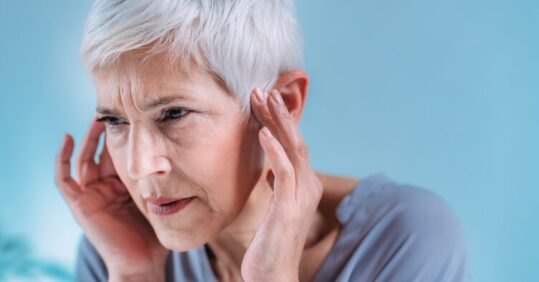 In a systematic review and meta-analysis based on two literature searches, researchers estimated the annual worldwide incidence of the condition was 1%, with 14.4% of adults experiencing any tinnitus and 2.3% experiencing a severe form.

The prevalence did not differ significantly by sex, but did increase with age, ranging from almost 10% among adults aged 18-44 years up to almost 24% among those aged 65 years and older.

‘This study suggests that the global burden of tinnitus is large, similar to migraine and pain, and the lack of effective treatment options justifies a major investment in research in this area,’ the researchers wrote in JAMA Neurology.

‘Health policy makers should consider the global burden of tinnitus, and greater effort should be devoted to boost research on tinnitus.’

The researchers initially conducted an umbrella review: a systematic review to identify published meta-analysis, pooled analysis and systematic reviews providing data on prevalence or incidence of the condition.

The second search was a traditional review of original publications: a systematic review of all original articles on the prevalence or incidence of tinnitus to update the results identified in the umbrella review.

They found prevalence of tinnitus significantly differed by continent, ranging from 5.2% in Africa to 21.9% in South America, while in Europe, it was 14.7%.

Genetic epidemiology studies and genomic studies had recently shown that tinnitus is hereditary, the researchers noted.

Therefore, while more research was needed, it was possible differences in population genetics could be associated with the large discrepancies in severe tinnitus across different countries and continents.

It had also been hypothesised that tinnitus was linked to socioeconomic status, but the researchers found the presence of tinnitus did not differ by among per-capita GDP tertials.

However, it did differ according to latitude of the countries’ main cities, with countries whose main city was at an intermediate latitude (40° – 51°) having the lowest prevalence and lowest severity of tinnitus.

‘Tinnitus has been reported to have a seasonal pattern, where it is worse in winter than in summer. Thus, the hours of sunlight per day or certain temperatures might be associated with the onset or severity of tinnitus. Future analytical studies should investigate this issue is more detail,’ the researchers wrote.