‘Hospital at home’ a good option for many older patients, study suggests 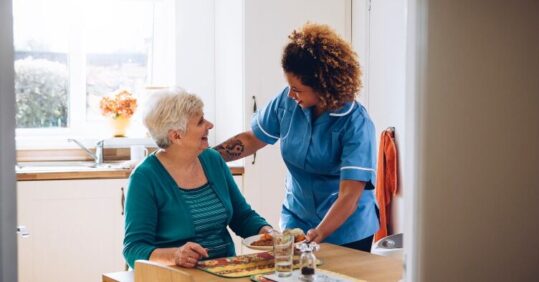 ‘Hospital at home’ care could be a good alternative for many older people compared to being cared for in hospital, as it is cheaper and linked to reduced care home admissions, a study has found.

The research, conducted by the National Institute of Health and Care Research (NIHR), examined 1,000 people across nine locations who were being considered for hospital admission. Researchers found that there was no increase in deaths after six months and a year in the patients care for at home, compared with hospital care.

Hospital at home is a service already offered in some parts of the county in which a geriatrician works with a multidisciplinary team of NHS specialists, including nurses, to provide care in the homes of those who might otherwise be admitted to hospital.

The authors of the paper say that until recently it has not been known whether hospital at home provided a safe alternative to hospital admission given how complex the health conditions of older people can be. However, their new research suggested that people receiving this were slightly less likely to be admitted to a care home, and found it was a cheaper alternative than hospital care.

However, the authors acknowledged that hospital at home is not suitable for the most unwell older people. In addition, people using the service cannot have poor housing conditions – and for, example, need handrails fitted if required, has heating and hot water.

This comes after a previous study found that reducing avoidable admissions by providing better care in the community could be an important step to reducing hospital wait times.

Professor Vic Rayner OBE, CEO of the National Care Forum, said: ‘We have known for a long time that wrapping care and support around the person produces better outcomes for them and improved satisfaction with that care and support. This valuable research highlights how effective geriatrician led hospital at home services can be.

‘It also shows the importance of being able to include other professionals in the team caring for the person and the vital role of suitable housing. About 2m older people live in unsafe housing and this must be noted when considering how to apply the learnings from this research.’

However Professor Rayner also said that it was ‘disappointing that the report is silent on the value of social care, which is likely to have featured in the lives of many of the people included in the trial.

‘As an essential partner to the successful implementation of the findings of this report it is vital that the huge pressures facing the social care system to respond to increased demand for services and a shrinking workforce gets the focus and support it needs in order to deliver positive outcomes for people.’

Yet the report does highlight the important role that district nurses play in providing healthcare, and how the hospital at home model can make the most of their skills.

One carer interviewed by the researchers said that while in hospital, ‘The district nurses said, ‘you’ve been taken off our books now because you’re in hospital’, so she had to go through the doctor again.’

However, the report continued to say that in the hospital at home setting ‘district nurses longer-term involvement with those receiving HAH was considered beneficial’. It added: ‘Staff at all sites said that practical tasks, such as intravenous medication administration, end-of-life care and leg ulcer management, were considered areas of potential synergy between district nursing and the HAH team.

‘However, at times, they considered that stronger communication would enable more effective joint-working between the two.’

The paper also found that hospital at home performed better in some outcome measures; notably risk of delirium, and admittance to long term residential care.

Patients in the hospital at home group reported lower risks of delirium (sudden confusion) at a one month check-up than the hospital group, and slightly fewer were transferred to long term residential care.

Also reacting to the research, Professor Martin Green, chief executive of Care England: ‘Independent sector providers have the commitment to offer flexible, best-value solutions which will help maximise the independence of service users and improve their quality of life. Joint strategic planning should build upon meaningful, positive relationships between independent and statutory organisations.’