One in three older adults developed new condition after Covid 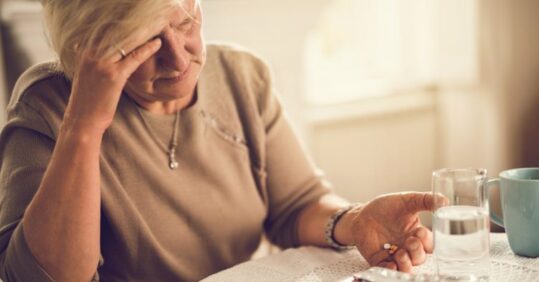 Old woman holding her head in pain while about to take medicines.
Emma Wilkinson

Almost one in three older adults who were infected with Covid in 2020 developed at least one new condition needing medical attention in the following months.

A US analysis of 133,366 people aged 65 or older diagnosed with Covid before April 2020 found 32% sought medical attention in the post-acute period for one or more new or persistent conditions. This was 11% higher than the 2020 than non-Covid patients.

Some of the conditions are commonly reported longer-term outcomes of Covid including respiratory failure and fatigue.

But Covid-19 patients were also at increased risk of other conditions including high blood pressure (an extra 4.43 per 100 people) and mental health problems (an extra 2.5 per 100 people), the researchers reported in the BMJ.

The analysis which looked at any new condition 21 days after Covid and for the next three months, also found an increased risk of dementia.

Those who had been admitted to hospital with Covid-19 had a markedly increased risk for most but not all conditions. The risk of several conditions was also increased for men, for those of black race, and for those aged 75 and older.

The researchers noted that for some diagnoses it the data might not be picking up a truly new condition triggered by Covid-19.

But they warned that with more than 357 million people infected with coronavirus worldwide, ‘the number of survivors with sequelae after the acute infection will continue to grow’.

The findings could also improve planning for healthcare resources, they added.

Dr David Strain, chair of BMA Board of Science and clinical senior lecturer at University of Exeter Medical School, said the longer-term repercussions ‘for a health a social care sector that is already dealing in a substantial backlog will be significant, and the personal impact on people who thought they had recovered from the virus, and their families could be devastating’.

He added: ‘Amongst these visits are some of the diagnoses that are already acknowledged as symptoms of long Covid, such fatigue, blood clotting disorders and shortness of breath, however there were also increases in other conditions that are currently not recognised as part of long Covid syndrome such as kidney failure.’

He added: ‘Of greatest concern was the increased risk of dementia that was approximately two and a half times more likely to occur.

‘This is not completely unexpected; brain fog is recognised in the younger population already, therefore it is not surprising that in a population with pre-existing cognitive decline this could push them over a threshold into dementia.’

He added that the numbers in the paper were higher than that reported in ONS data and it may be some people accept their symptoms without seeking medical support meaning potentially ‘the number of older adults suffering with long Covid may be much higher than previously recognised’.