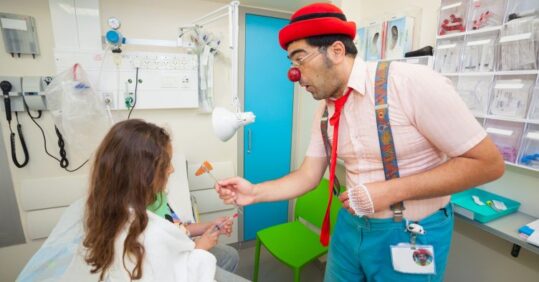 Clowns may improve the physical and emotional wellbeing of children and adolescents in hospital, a study has found.

Brazilian and Canadian researchers (full list of study authors below) looked at the findings of 24 clinical trials involving 1,612 children that analysed reactions including anxiety, pain, emotional wellbeing and stress. The earliest trial was carried out in 2005 and the latest in February 2020.

The review, published this month in the BMJ, found that children and adolescents, either with acute or chronic conditions, had ‘significantly less anxiety’ and ‘improved psychological adjustment’ in the presence of hospital clowns for multiple procedures, including before a painful operation and during the induction of anesthesia.

Other research cited showed that interaction with hospital clowns can even result in respiratory symptoms disappearing early and pains scores improving in children under seven during a painful procedure in the paediatric emergency department.

The study concluded: ‘Our results indicate that the involvement of clowns during medical procedures reduce fear, pain, and symptoms of invasiveness.

‘Overall, these studies also suggest that hospital clown interventions are valuable in relieving the pain and emotional distress in children undergoing painful and stressful procedures.’

Only one study found no difference in the level of stress among children who interacted with hospital clowns compared with a control group.

The tradition of hospital clowns dates back over a hundred years with the first modern example reported in September 1908 in London.

They provide a complementary form of healthcare by using techniques such as music, juggling, improvisation, magic, storytelling, and puppetry, to entertain children and adolescents.

Many clowning programmes now operate across the world including in the UK, the US, New Zealand, Australia, Canada, Israel, South Africa, Hong Kong and Brazil.

The researchers say further studies are needed with larger sample sizes and looking at specific populations separately, such as patients with cancer.