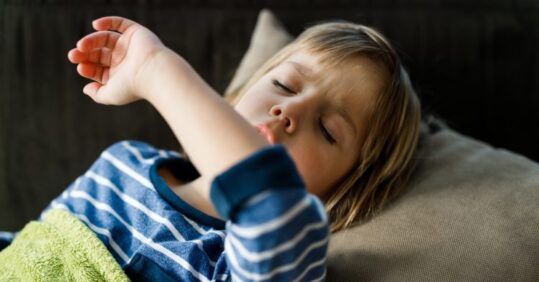 NHS England has told general practice to prepare for a rise in cases of respiratory viruses among children of up to 50% compared with pre-pandemic levels.

He added that the increase in cases is due to there being a ‘significant cohort’ of children who have ‘never had normal viruses’.

Professor Kenny said trends in the southern hemisphere indicate that there could be a 20-50% increase in children with respiratory viruses next winter compared with before the Covid pandemic.

Speaking in NHS England’s latest GP webinar on Thursday, he said: ‘We’ve heard reports from the southern hemisphere of unseasonal outbreaks of respiratory viruses as lockdown eases and as the non-pharmacological interventions such as distancing and face mask wearing goes away.

‘The most likely potential model is a 20-50% increase in children with respiratory infections and that’s largely due to the fact that we’ve got a significant cohort of children now who have never had the normal viruses.’

However, he added that the ‘worst-case scenario’ – which is ‘least likely’ – is a ‘doubling in numbers’, with the second most likely a ‘quieter or normal season’ thanks to ‘persistence in social distancing behaviours’.

Professor Kenny told GPs that it’s ‘difficult to know where the pressures will be highest’ but that this will ‘probably’ be in primary care, 111 and A&E.

He added: ‘We are looking at this with a national perspective [and] we are going to plan any response [but] it might be a difficult winter, [especially] if we see resurgence of Covid at the same time and pressures in adult services.’

His warnings come as the chief medical officer last week said he expected a ‘difficult winter’ with a resurgence of flu cases alongside another winter wave of Covid.

He said: ‘Some days it’s like an only paediatric clinic for me. Absolutely we’re there for the parents and support them but we do need some kind of support services as well.

‘We need wrap-around services to support general practice [as we are] already seeing huge workload increases – even 30% more than what we’ve seen previously. We do need this kind of support when this pressure will come up.’

GPs need 111 to ‘step up’ and ‘reduce the workload’ in practices, as well as ‘supporting services’ to be commissioned such as local ‘hospital at home’ visiting services, Dr Kanneganti said.

And NHS England should launch a public campaign to support GPs and inform patients which symptoms they should contact their GP, he added.

Meanwhile, an NHS England webinar moderator said GPs should ‘possibly’ consider hot hubs for children in response to a written question from an attendee.

They added that is being discussed, including in a meeting with the Royal College of General Practitioners held on Friday around the support needed for primary care.

It comes as respiratory viruses in children ‘disappeared’ in 2020, after a ‘steady increase in seasonal outbreaks’ over the previous five years, Professor Kenny said.

Last week, it was announced that GPs will soon be able to refer children and young people to new long Covid clinics as the specialist services are expanded.

A version of this article was originally published in Nursing in Practice sister publication Pulse.