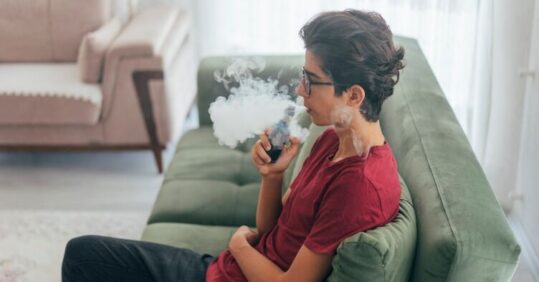 More children aged 11-15 are now vaping and using e-cigarettes than in previous years, even as the number of children drinking, smoking, and taking drugs has fallen.

NHS Digital statistics released today show that 9% of the age group were classified as e-cigarette users in 2021, 50% higher than in 2018 when only 6% of young people were vape users.

However, the numbers of young people taking drugs, drinking alcohol, and smoking cigarettes have fallen. In 2021, only 3% of pupils were cigarette smokers, down from 5% in 2018, and those who say they have smoked at least once fell from 16% to 12%.

Sharon White, chief executive of the School and Public Health Nurses Association (SAPHNA), said that school nurses – as ‘leaders’ of the Healthy Child Programme, which is a framework for the delivery of public health services to children and families – have a ‘pivotal role in the education our children and young people around the use of vaping’.

She added: ‘Through their partnership working with schools, local authorities, NHS and other stakeholders and in their contact with children, young people and families, they use appropriate opportunities to promote positive health and well being, to enable informed choices around risk-taking behaviours, and empower them to seek advice and support should they need.’

This NHS Digital data also revealed concerns over students quality of life, particularly for those who use substances of any kind.

Of students interviewed, 18% who had not recently smoked, taken drugs, or drunk alcohol experienced low levels of life satisfaction.

While the number of students vaping has risen across the board some groups showed more significant levels, with 18% of all 15-year-olds using vapes. Girls, the data suggested, were even more prone to vaping as 21% of all 15-year-old girls vaped.

The data also showed that 46% of 15-year-old girls reported a low level of happiness, and 51% reported a high level of anxiety on the previous day.

Ms White added: ‘Given the high levels of mental health issues they are experiencing since Covid-19 it is unsurprising to see the increase in girls experiencing anxiety problems. This alongside the depleting school nursing workforce, exponential rise in safeguarding demands and increased industry vaping visibility will, no doubt, have an ongoing negative impact on child and young persons’ health and well-being.’

Some studies have suggested that vaping is less addictive than smoking and there is evidence that e-cigarettes are far less harmful than smoking tobacco, according to a government-commissioned independent review published in 2015.

In addition, a study published by University College London this year found that vaping was not a gateway to smoking, although this contradicted previous observational research.