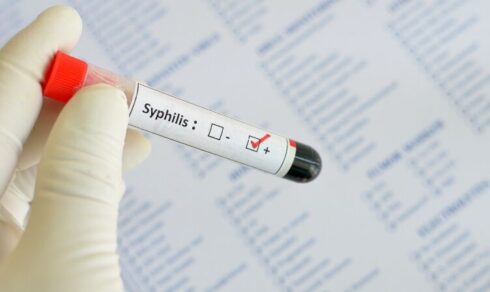 Syphilis is one of the oldest known sexually transmitted infections (STIs). Caused by the bacteria Treponema pallidum, the origins of syphilis are not fully known, but the first written records of it in Europe date back to 1494.1 By the 1600s, syphilis had become one of the main public health concerns of the time, with up to 20% of adults in the late 1800s thought to have received treatment for the infection.2 Following the discovery of penicillin as a treatment in 1943,3 and the increase in abstinence and condom use during the early 1980s HIV epidemic,4 the prevalence of syphilis in the UK dropped dramatically.

Although this dramatic increase initially affected mostly gay, bisexual and other men who have sex with men (GBMSM), heterosexual diagnoses have risen dramatically over the past decade,5 meaning there is no typical ‘at risk’ group. It is incumbent on all health professionals to be aware of the disease and its symptoms to prevent long-term negative effects on individuals with syphilis.

Why is this relevant to general practice?

The neighbourhood setting of the GP surgery means practice nurses may see unusual presentations, or patients who would not typically attend a sexual health clinic. Any unusual or non-resolving symptoms should incorporate syphilis as a differential diagnosis until ruled out by serology.

Syphilis can have a devastating effect on mother and child during pregnancy. All pregnant patients attending general practice should be encouraged to have their routine screening tests, with special caution for those presenting late, those recently arrived in the UK or those having had a change in sexual partner during pregnancy.

Patients may also present with a range of symptoms (as will be discussed below), and it is important to have a low threshold for referral to sexual health clinics, even if they believe themselves to be at a low risk. Discussions around cervical screening and contraception also present an excellent opportunity to offer sexual health screening in general practice.

Syphilis testing also presents an opportunity for screening for other blood-borne infections such as HIV which may have similar impacts on a patient’s long-term health. See more information about encouraging patients to test for HIV here.

How is syphilis transmitted?

Transmission occurs most commonly through sexual contact. Congenital transmission is also possible. The T. pallidum bacterium can pass through intact mucous membranes, therefore it can be transmitted orally (via kissing or oral sex) on contact with an infectious lesion. There is limited evidence for transmission via needles. Syphilis is not transmitted via general social contact, sharing eating utensils or toilet seats. The bacteria die quickly outside of the body.

What are the symptoms?

Syphilis often follows three specific stages at which different symptoms may occur. However, the infection is known as ‘the great mimicker’ as symptoms can be absent, vague, occur in different orders, or may be completely divergent from the typical presentation. As a result, it is recommended that syphilis be included in a patient’s differential diagnosis for a variety of symptoms unless ruled out.6

The typical stages of syphilis are:7

A painless shallow ulcer, known as a chancre, appears at the site of infection. The chancre contains infectious T. pallidum spirochaetes. The classical presentation of a chancre is a firm, painless, indurated ulcer, between 0.5-3cm in size. However, chancres can also be multiple (especially in people living with HIV), itchy or painful. Typically, lesions will appear at the site of inoculation – often in the genital area, but some may be located elsewhere. As chancres are often painless, they can easily be missed if not in an easily visible location, and can appear on the cervix, throat or rectum. Lymph node enlargement is common but will often be delayed by up to 10 days after chancre formation. Chancres will generally resolve without treatment between three to eight weeks, however the active syphilis infection remains.

Secondary syphilis can manifest in many different ways. A typical presentation involves the skin, mucous membranes or lymph nodes. A typical syphilis rash is symmetrical, pink and not itchy. It often occurs on the trunk and extremities but may also appear as a palmar-plantar rash. A rash may also appear as wart-like lesions known as condylomata lata. Patients may also present with a fever, flu-like symptoms and malaise.

Although these are typical symptoms, secondary syphilis can also present as weight loss, alopecia, hepatitis, and neurological symptoms among many other presentations. Again, these symptoms may resolve within three to six weeks even without treatment.

Late infection occurs up to 40 years after initial infection. Due to the prevalence of penicillin use, many of the most severe sequelae of syphilis are thankfully rare, but may still occur without treatment.

Cardiovascular symptoms may include aneurysm, aortic regurgitation and angina. Gummatous symptoms develop very late after infection and manifest as granulomatous destructive lesions. They can occur anywhere in the body but typically affect bones or skin. These are the commonly pictured disfiguring lesions associated with the pre-penicillin treatment era.

Neurosyphilis (infection of the central nervous system) can occur at any stage of the infection but is most often linked to tertiary syphilis. In earlier stages it may be asymptomatic; later, it can manifest as paresis, including symptoms similar to dementia, or tabes dorsalis, seizures and paralysis.

Syphilis can be transmitted during pregnancy or birth. Not all babies born with syphilis will show symptoms. Early symptoms of congenital syphilis (developing within two years of birth) include hepatosplenomegaly, rash, fever, lymphadenopathy or skeletal abnormalities. If untreated, later symptoms can include facial and dental abnormalities, deafness and neurological symptoms. In order to ameliorate the negative effects of syphilis in the young, routine screening is offered to everyone seeking antenatal care in the UK.

How is syphilis diagnosed?

Syphilis may be treated presumptively in sexual health clinics based on history and examination. Clinics may offer dark field microscopy which can isolate treponemes from a chancre. Neurosyphilis is diagnosed by sampling cerebrospinal fluid. More commonly, however, syphilis is identified through serological sample. If initial screening tests are positive, more detailed tests are conducted which, in combination with a thorough history, decide which stage the patient is at and how the infection should be treated. As interpretation of test results can be complex, it is essential to seek guidance or referral to genitourinary medicine specialists in the event of a positive syphilis diagnostic test result.

What treatment is available?

Patients diagnosed with syphilis should be referred to a sexual health clinic for management, partner notification, and screening for other STIs (if not already conducted). First-line treatment involves intramuscular injections of benzathine penicillin. This may be a single dose, or three doses spaced apart by seven days depending on the stage of the infection. Treatment with doxycycline or ceftriaxone may be given in the event of penicillin allergy. For neurosyphilis, steroid treatment is given alongside daily penicillin treatment for 14 days.

Patients receiving syphilis treatment may experience a reaction known as the Jarisch-Herxheimer reaction: an acute febrile illness with headache, myalgia, chills and rigors. This is self-limiting and usually resolves within 24 hours.

Patients should be advised to abstain from sex for 14 days and inform any sexual partners of their diagnosis – epidemiological treatment may be given based on history. Follow-up serology should be conducted at three, six and twelve months to ensure treatment has been effective. Once positive, a patient’s EIA (enzyme immunoassay) result will always remain positive, but this does not confer active infection. However, if in doubt about a patient’s previous treatment history, advice should always be taken from  a sexual health specialist clinician.