Study reveals cause of respiratory infections in cystic fibrosis 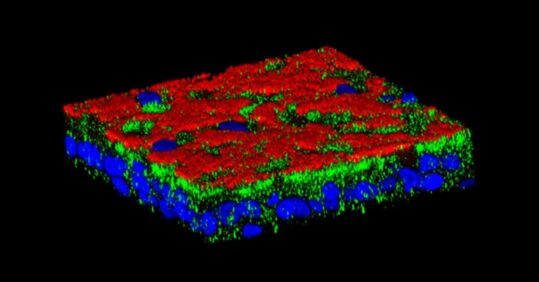 A study published this month has found that a protein is behind the large number of life-threatening respiratory infections in people with cystic fibrosis.

The scientists behind the discovery said it could pave the way for therapies that help prevent respiratory infections by inhibiting Vav3, making it harder for bacteria to anchor to airways.

Study author Professor Marc Chanson said: ‘[The findings] might explain the high number of chronic lung infections in people with cystic fibrosis…Understanding this process could help preventing their occurrence.’

It is caused by a mutation in a gene for a protein involved in the secretion of mucus. This leads to sticky mucus building up in the lungs and digestive system, triggering digestive problems and lung infections.

Lung infections for people with cystic fibrosis are primarily caused by the Pseudomonas aeruginosa bacteria, which are highly resistant to antibiotics.

Professor Chanson said that although the mucus build-up was known to help trap bacteria, it was not clear why these bacteria ‘anchor so easily’ to the airways.

The researchers compared airway cells from people with healthy cells and those affected by cystic fibrosis. They found that Vav3 was more present in sick cells.

Vav3 interacted with two other proteins, fibronectin and integrin b1, to create a bacterial docking station that promoted Pseudomonas aeruginosa infections, they discovered.

Professor Chanson continued: ‘This is the first time that a mechanism creating a favourable microenvironment for a bacterium before it even arrives has been observed.’

Read more: Staying safe with asthma amid the coronavirus pandemic