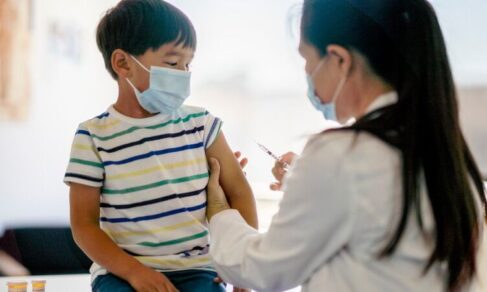 Coverage for all routine vaccinations for children under the age of five in England are now below the 95% target set by the World Health Organization (WHO).

NHS Digital data published today reveals that uptake for 13 of the 14 routine vaccinations have fallen in 2021-21, compared with the previous year.

According the NHS digital, some of this decrease in vaccine coverage is likely due to disruption caused by the Covid-19 pandemic.

The data shows that in 2021-22, only 89% of children had had their first dose of the measles, mumps and rubella (MMR) vaccine, down from 90% the year before. Only 85% had received their second dose by their fifth birthday, a decrease from 87% the previous year.

Of all the vaccinations offered to under fives, only the coverage of pneumococcal disease has increased. However, this is compared to 2019-20 figures, as there is no data for 2020-21. Although it increase from 93% to 94% in this time, this is still below the 95% WHO target.

The region with the highest childhood vaccination coverage for MMR was the north east of England with 94.5%, but no region met the WHO target.

An NHS spokesperson said: “This data covers the pandemic, when people were much less likely to come forward for childhood vaccinations.

‘Childhood vaccinations last for life so it is never too late to come forward for one, which is why this year the NHS launched a wider childhood vaccination recovery programme including a mass MMR catch-up campaign to help vaccinate children who missed a vaccine – any parent or carer whose child missed out on a vaccination should come forward and book their child in without delay.’

There was also a very slight decrease in coverage of the 6-in-1 and 5-in-1 vaccines which are normally given to children in a course of three doses at 12 months to protect against diptheria, pertussis, tetanus, polio, Hib and hepatitis B.

With national coverage down only 0.2% on the previous year, eight out of nine regions were able to achieve 90% coverage. However, only the north east was able to reach the target of 95%.

In London, which had the lowest uptake of both vaccines, only 87% had received the 6-in-one or 5-in-one vaccinations by their second birthday.