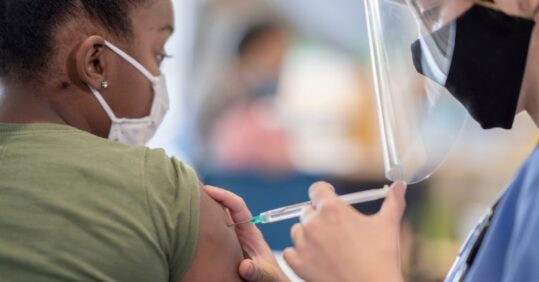 Over-70s from BAME backgrounds have been far less likely to have their Covid jab than their white peers, with Black Africans the least likely to come forward.

New analysis from the Office for National Statistics (ONS), published today, showed that 90.2% of all over-70s in England had received at least one dose between 8 December and 11 March.

But the percentage vaccinated against Covid was lower among black, Asian and minority ethnic (BAME) groups compared with the White British population (which had a 91.3% uptake rate), with the lowest rates among:

The ONS further stressed the discrepancy was ‘not fully explained by differences in other geographical and socio-demographic factors or underlying health conditions’.

It comes as practices have been working to boost uptake in black, Asian and minority ethnic (BAME) groups amid widely circulating misinformation regarding vaccine safety.

Applications will be prioritised from areas that are assessed as having ‘significant vaccine inequalities and that have not received community champion funding’, address a historically underserved community, or those that propose ‘novel or innovative approaches’.

This follows an earlier allocation of £4.2m made in February.

Earlier this month, it was revaeled more than four in 10 black British adults reported they were vaccine hesitant, the highest of all ethnic groups.