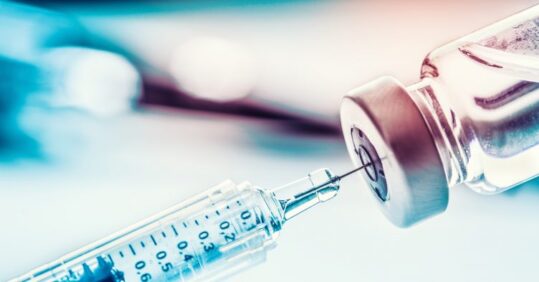 General practice is to start delivering the ‘bulk’ of as yet existing Oxford vaccine doses from this week, the Government has said.

It comes as the first patients are receiving the jab in hospitals today, after the MHRA authorised the Oxford/AstraZeneca vaccine for use in the UK last week.

The UK Government has pre-ordered 100 million doses of the vaccine, with ‘more than half a million’ available today, it said.

‘Tens of millions more’ will be delivered ‘in the coming weeks and months’ once the MHRA has quality checked batches, it added.

The Department of Health and Social Care (DHSC) said that ‘hundreds’ of GP-led services and care homes are set to receive vaccine stock ‘later in the week’.

It said: ‘The first Oxford/AstraZeneca vaccinations will be delivered at hospitals for the first few days, as is standard practice, before the bulk of supplies are sent to hundreds of GP-led services and care homes later in the week.’

The vaccine can be stored at fridge temperatures of 2-8C, making it ‘easier to distribute’ than the Pfizer vaccine, it added.

And 180 additional GP-led vaccine services are due to launch this week along with ‘up to 100 more’ hospital sites – ‘subject to final assurance checks’ – taking the total to over 1,000, the DHSC said.

Health secretary Matt Hancock added: ‘I am delighted that today we are rolling out the Oxford vaccine – a testament to British science. This is a pivotal moment in our fight against this awful virus and I hope it provides renewed hope to everybody that the end of this pandemic is in sight.

‘Through its vaccine delivery plan, the NHS is doing everything it can to vaccinate those most at risk as quickly as possible and we will rapidly accelerate our vaccination programme.’

The vaccine will be rolled out to priority groups including care home residents and staff, over 80s and healthcare staff, in line with the JCVI’s recommendations, the DHSC added.

However, the MHRA, JCVI and four UK chief medical officers have agreed to delay the gap between doses to 12 weeks, to deliver the first dose to as many people as possible in the shortest time.

Meanwhile, the DHSC today said that ‘more than a million’ people in the UK have now received the Pfizer/BioNTech vaccine, with its roll out to continue ‘at pace’.

Last week, the Government announced that the latest vaccine uptake statistics show 944,539 people had so far received a first dose of the Pfizer/BioNTech vaccine.

Mr Hancock said that this number will ‘rapidly increase in the months ahead’, now that the Oxford vaccine has been approved for use.

The Oxford vaccine became the second to be authorised for use in the UK last Wednesday following months of clinical trials and a rolling review by the MHRA since September.

The first peer-reviewed findings from its phase 3 trials were published last month, which reiterated findings that the vaccine is 90% effective when given as a half dose followed by a full dose.