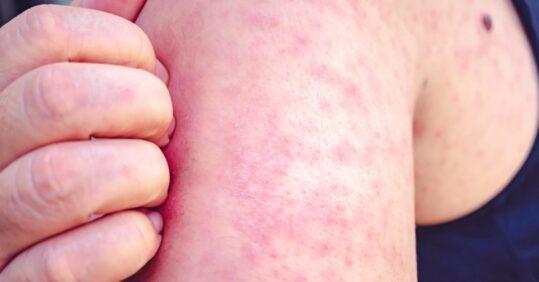 Measles surged worldwide last year with deaths doubling since 2016 and reaching the highest number of reported cases in 23 years.

This is according to the World Health Organization (WHO) and the United States Centers for Disease Control and Prevention (CDC). They also warned in a paper, published earlier this month, that the Covid-19 pandemic had disrupted vaccinations and crippled efforts to prevent measles outbreaks.

More than 94 million people are at risk of missing vaccines due to paused measles campaigns in 26 countries as of November with many countries experiencing ongoing outbreaks, although reported measles cases are lower in 2020.

The world must ensure it has the ‘resources to continue immunisation campaigns for all vaccine-preventable diseases, even as we address the growing Covid-19 pandemic,’ she said.

‘Before there was a coronavirus crisis, the world was grappling with a measles crisis, and it has not gone away,’ she added.

WHO director-general Dr Tedros Adhanom said the data shows ‘we are failing to protect children from measles in every region of the world’.

He continued: ‘We must collectively work to support countries and engage communities to reach everyone, everywhere with measles vaccine and stop this deadly virus.’

The report stated that ‘the fundamental cause of the resurgence was a failure to vaccinate’, both in recent and past years.

To control measles, coverage rates for both vaccine doses must reach 95% and be maintained at national and subnational levels.

MCV1– the first dose of the vaccine – coverage has sat between 84% and 85% for more than a decade, while MCV2 – the second dose – coverage has been slowly increasing but is now only at 71%.

In this year’s annual State of Primary Care report, released by Nursing in Practice’s publisher Cogora in April, 73% of primary care nurses – including advanced nurse practitioners, and practice, community and district nurses – said they were in favour of compulsory vaccinations for children.