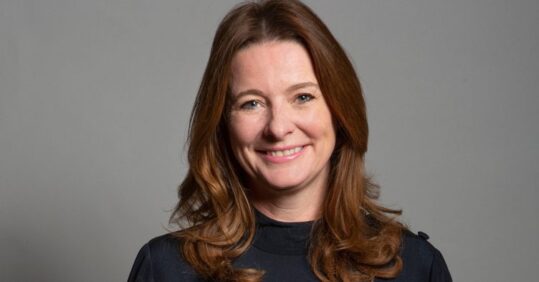 The MP for Chichester will replace Helen Whately, who has become the exchequer secretary to the Treasury. Ms Whately was care minister since her appointment in February 2020, a month before the first Covid lockdown.

Ms Keegan, who was previously parliamentary under-secretary of state for apprenticeships and skills at the Department of Education, tweeted upon her appointment: ‘I am honoured to have been asked by Boris Johnson to join the Department of Health and Social Care (DHSC).’

‘There are significant challenges ahead and I am looking forward to working closely with Sajid Javid and the team to get stuck in,’ she added.

She will oversee the mandatory jabs policy for care home staff come into force on 11 November. The controversial regulation has prompted fears of mass staff exodus from the sector.

The MP for Erewash studied biology at university then worked as a biomedical scientist. She became a pharmaceutical company director before she entered Parliament in 2015.

The next few months will see the rollout of a record flu programme targeting 35 million people, on top of booster jabs including for over-50s and other vulnerable adults and one vaccine dose for 12- to 15-year-olds from this week.

Responding to her new role, Ms Throup tweeted: ‘Honoured to have been appointed public health minister, Department of Health and Social Care, at such a critical moment for our country as we begin the huge task of building back better from the pandemic.

‘I can’t wait to get stuck into my new portfolio, rolling out the Covid vaccine booster programme and supporting Boris Johnson and Sajid Javid to deliver lasting reforms to health and social care.’