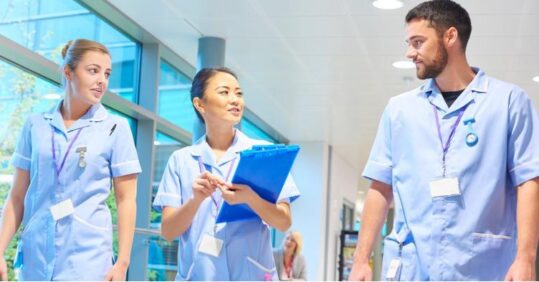 Male nurses are more than twice as likely to move up two pay bands within a decade compared to their female peers, a new report has found, with any progress in reducing disparities amongst NHS staff because of gender, race or religion proving to be ‘painfully slow’.

The research, published by think tank the Nuffield Trust, found 41% of male nurses had progressed up two pay bands after nine years’ service compared to 20% of female nurses.

This leads to worse patient care and makes it harder to hire and retain staff ‘at a time when more capacity is desperately needed’, it warned.

The report also found the NHS does not have the tools to reduce disparities because ‘crucial evidence’ is lacking, high-profile groups needing support are overlooked and the understanding of what is needed to improve equity is ‘poor’.

The authors explained there is not enough evidence to tell whether commonly used approaches to improve diversity – such as increasing apprenticeships and trying to reduce unconscious bias – work.

They also pointed out that ethnic groups are ‘too often being lumped together’ and other disparities overlooked. For example, nationality is not counted in the NHS staff survey, they said.

Dr William Palmer, senior policy fellow at the Nuffield Trust, said progress in ‘reducing disparities has been painfully slow – and we even saw signs that bias may be getting worse’, even though the NHS has recognised discrimination as ‘morally unacceptable’ for years ‘on paper’.

He continued: ‘The health service must be really honest about which solutions are really backed by evidence, and make sure this is widely known.’

Danny Mortimer, chief executive of NHS Employers, said: ‘There is an absolute commitment from our members to finally address the inequities in our workplaces. This report highlights action that is being taken but rightly reminds us that far more urgency and impact is needed.

‘To be clear, the link between staff and patient experience is irrefutable, and we have an obligation to improve the experience of all parts of the health service’s rich and talented workforce.’

The report, commissioned by NHS Employers, was based on interviews with NHS trusts, a review of literature and data analysis.

This comes after the RCN warned last week that mandatory vaccines for healthcare staff could further marginalise’ and lead to higher turnover rates in groups more likely to be vaccine hesitant, such as black and minority ethnic staff.