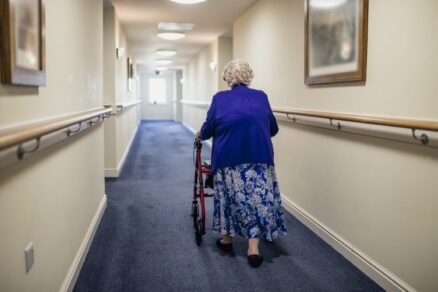 A senior woman walking down a corridor with the assistance of a walker. view from rear
Mimi Launder

Almost half of care home providers are closed to new admissions because of the impact of the Omicron variant, a survey published today has found.

The poll, conducted by the National Care Forum (NCF) of its membership between 5 and 10 January, found 43% of care home providers are closed to new admissions, while 66% of homecare providers have had to refuse new requests for homecare.

The NCF raised ‘serious concerns’ that NHS England’s bid to discharge more patients early from hospitals – as outlined in a letter last month – puts ‘additional pressure on an ‘overstretched’ sector.

In addition, the survey found providers reported a 14% absence rate and 18% vacancy rate. The number of unfilled posts has been ‘growing at an alarming rate over the last three months’, the NCF added, with policy decisions such as mandating vaccines ‘compounding’ the situation.

Vic Rayner, NCF CEO, called the presence of ‘enormous pressures’ in social care ‘unacceptable’, particularly nearly two years on since the start of the Covid-19 pandemic.

She continued: ‘Staff shortages are excessively high and everything must be done to support providers to operate safe and quality services, so that people have access to the care and support they need, when they need it.’

Although the Government’s long-awaited social care white paper published in December last year set out a 10-year vision for social care, healthcare think tanks have said it does not do enough to address the workforce crisis engulfing the sector.

The £1.7bn funding for the white paper comes from the Health and Social Care Levy, funded by a 1.25% rise in National Insurance, and introduced to reform social care and clear the NHS backlog.

Overall, the levy is expected to make £36bn over three years, most of which will go towards the NHS. Of the £5.4bn earmarked for social care, £3.6bn will also pay for the new cap on care costs meaning no one should pay more than £86k on care in their lifetime.