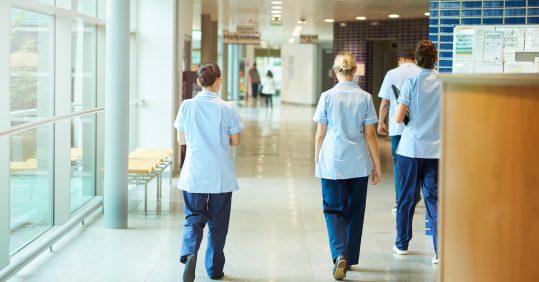 Staffing and wellbeing stand as the ‘most pressing’ concerns surrounding Brexit-related immigration rules among NHS staff in operational roles, a Nuffield Trust report has shown.

The report – which is based on data analysis and 20 interviews with health sector and Government stakeholders – flagged that the NHS people plan has been ‘delayed for well over a year’.

It also suggested that it is currently ‘unclear’ what plans are in place to promote the UK as an attractive place to work.

Published on Monday, the report comes nearly one year after new immigration rules came into place as the UK left the single market on 1 January 2021, having formally exited the EU a year prior.

The new rules still permitted the recruitment of doctors and nurses from the EU, but with bureaucratic hurdles and costs ‘greatly increased’, it said.

In particular, this included placing applicants from the European Economic Area (EEA) on the same footing as those from the rest of the world.

The Nuffield Trust said that the ‘situation in social care, where new immigration rules effectively halt immigration from the EEA, appears to be deteriorating rapidly’.

Similarly, the number of EEA-trained nurses on the NMC steadily declined between September 2016 and March 2022.

The authors called for ‘more decisive action’ to address the worsening workforce problem.

The Nuffield Trust added that the Government ‘must address the lack of transparency’ in order to provide more clarity on workforce numbers through the ‘provision of better data’.

This comes a month after MPs voted against amending the Health and Care Bill to grant greater transparency around workforce numbers in the NHS.

The report also found that NHS staff noted an increase in hate crime and discrimination, with some linking this to Brexit.

The report stated that there is ‘little relevant data’ at an individual level to support this.

The authors noted that while the NHS staff survey shows that more Black and ethnic minority staff are reporting discrimination, the survey splits staff by ethnic identification, rather than national origin.

Most EEA staff ‘would identify as non-British white’, it said.

In-depth polling and qualitative work would be needed to ‘determine whether the salience of Brexit as a political and social issue is involved’ in these trends, it said.

A report published last month revealed that inequality among NHS staff is ‘getting worse’.

Recent NHS England data indicates that one-in-10 Black and minority ethnic CCG staff members personally experienced discrimination from a manager or other colleagues between 2017 and 2019.

A version of this story was originally published on Nursing in Practice sister publication Healthcare Leader.