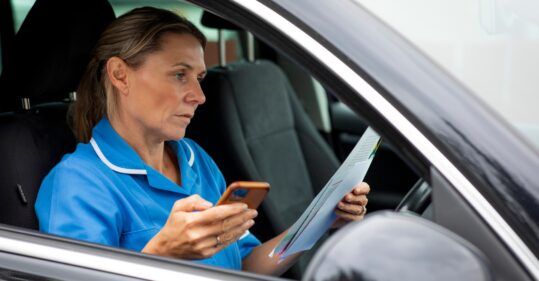 Nearly 90% of community and district nurses have to contribute to the running costs of their car to undertake their role, a joint QNI and RCN survey has found.

The poll of almost 2,000 community and district nurses ran in January 2022 before soaring fuel costs amid the Russian invasion of Ukraine, but still found mileage allowances typically did not cover work-related travel. Mileage rates were set in 2014 and have not moved since.

The results, seen by Nursing in Practice, also revealed 69% of respondents thought the cost of running a car presented a recruitment issue, while 60% said it posed a retention issue.

One respondent said rising fuel costs and limited pay rises for nurses ‘is making the community nursing role unaffordable,’ while another argued staff should not be ‘out of pocket for working and seeing patients’, particularly with recruitment and retention issues in the sector.

Another respondent summarised: ‘Without our personal vehicles, millions of housebound vulnerable people would not be able to get the care they need. It is utterly wrong that visiting professionals should be out of pocket when travelling to undertake this vital work.’

The survey was led by Professor Julie Green, head of nursing and midwifery at Keele University and Nursing in Practice board member; Sue Hill, chair of the RCN district and community nursing forum; and Dr Crystal Oldman, chief executive of the QNI.

What are the current mileage payments?

Mileage allowance rates are available to nurses on Agenda for Change (AfC) contracts or those with AfC mileage built into their contracts. Currently, it is set at 56p per mile for the first 3,500 miles and then 20p for each additional mile, although this rate varies between Trusts.

The survey found payments for the first 3,500 miles of travel were typically between 45p and 56p, although they were ‘one or two’ outliers up to 79p. For most respondents, the pay per mile reduced between 2,500 and 3,500 miles to between 11p and 28p per mile.

These payments are not calculated on a pro-rata basis, meaning those working full-time are more likely to exceed the 3,500-mile threshold after which payments decrease. The rates are also not adapted to suit the additional distances faced by rural or out-of-hours teams.

Nurses are also required to pay business insurance to cover travel for work.

Brian Morton, RCN national officer, said: ‘Some district and community nursing staff who rely on their cars to visit patients are telling us they are paying £100 more on petrol every month, putting an additional strain on their finances’.

He also repeated the RCN’s recent call for an ‘urgent and early review’ of mileage rates amid rising fuel costs. The average cost of a litre of petrol hit 163.5p and a litre of diesel 173.4p on Sunday, according to data firm Experian Catalist, up from 148.0p for petrol and 151.6p for diesel last month.

The NHS Staff Council reviews the rates every April and November, considering motoring costs and the cost of fuel. The trigger for a change in rates is a 20% increase or decrease in motoring/fuel costs over the 12-month average prices, but there has been no rise in payment since July 2014.

Mr Morton added: ‘Faced with heavy workloads and real-terms pay cuts, [community and district nurses] already have more than enough on the plate without this additional worry.’