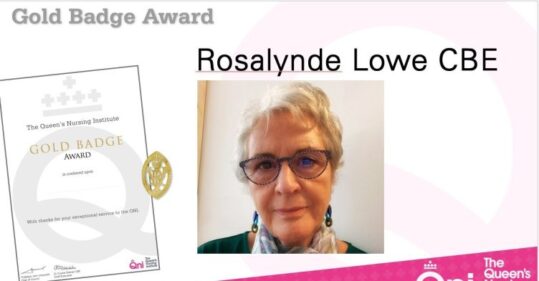 The QNI has presented a nurse the Gold Badge of the Insititute, which has only been awarded to only 16 people in the 134-year history of the community nursing charity.

Rosalynde Lowe won the award on Monday evening after providing 20 years of service to the QNI. She was appointed by the Queen as a patron appointed trustee for the organisation in 2012, previously served as chair on the QNI Council, and has been a trustee since 2012.

Presenting Ms Lowe with the gold badge, QNI Council chair Professor John Unsworth said she is ‘credited with the transformation’ of the QNI’. This includes the reintroduction the title of Queen’s Nurse and establishing the organisation’s work on homeless health.

‘Ros set about transforming the organisation over a 10-year period… It is true to say that we would not be the organisation we are today, providing a home and a voice for all nurses working in the community without Ros’ service, vision and leadership over the last 20 years,’ he continued.

The QNI also awarded the Ellen Mary Memorial Prize to Katya Buroni, Morgan Rodgers and Karen Williams. The prize – created in 2019 in memory of Ellen May, whose daughter is a Queen’s Nurse – is for outstanding students with a specialist practice qualification (SPQ) in general practice nursing.

In addition, six nurses Fellowship of the Institute, who are known within their field of expertise, and have a high profile and the respect of their peers. These are:

The nurses who were presented with the Queen Mother Award for Outstanding Service, which is given to community nurses who provide exception care to their patients, were:

And, for the first ever time, the International Community Nurse of the Year Award was presented. The recipients were jointly Marc Rodriguera and Dennis Singson.

At the ceremony, Professor Unsworth welcomed the award winners and guests. He also thanked the QNI’s supporters including the National Garden Scheme which recently announced its annual donation totaling £395,000 to the QNI.

The full list of winners can be seen here.