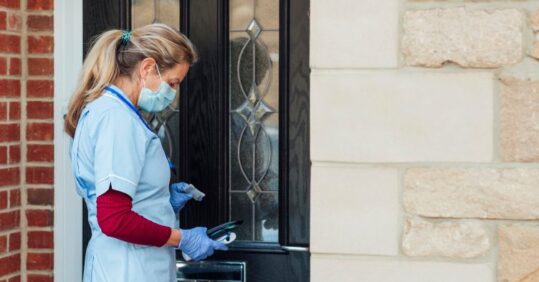 The QNI has today published safety standards for the district nursing workforce, amid concerns that workloads among services are ‘far exceeding’ capacity.

They outlined key factors to be taken into consideration when planning workforce to meet demand, set out areas of risk and gave examples of ‘red flags’ that require escalation.

For example, they identified a caseload of over 150 per whole-time equivalent (WTE), and nine to 10 visits a day for community nursing teams, as probable tipping points for more work left undone.

In addition, the standards identified the following red flags:

The standards were determined from modelling and using data from several sources including NHS and Officer for National Statistics data, academic literature, and surveys.

The QNI said they should be read alongside the RCN’s nursing workforce standards and the NHS Staff Council document Welfare Facilities for Healthcare Staff.

‘District nursing acting as a failsafe’

Commenting on the standards, Professor Leary raised concerns that current district nursing workloads are ‘far exceeding the capacity of services’.

She pointed out that district nursing services ‘rarely refuse patients or close a caseload’, which she said is a ‘high-risk strategy’ that has led to ‘unremitting demand’.

Professor Leary continued: ‘District nursing teams acting a failsafe for other NHS and social care services, rather than as district nursing service per se. Patients are being referred to district nursing simply because other services are short staffed or are not offered as a 27/4 service.’

For example, using data from the last seven years, the ICNO found during the development of the standards that patients were referred to teams because other services were ‘short staffed’ or ‘not offered as a 24/7 service’ while district nursing was.

Professor Leary also spoke out against ‘scheduling platforms’, which are currently unproven, and stressed the scheduling of work should be ‘person-centered and individualised’.

She explained: ‘Nursing is a profession of vigilance not simply one of task delivery. Scheduling of work must be person-centered and individualised and the named Registered Nurse must determine the appropriate ‘window’ of time to deliver holistic care.’

It comes after Professor Leary told Nursing in Practice that there is ‘very little strategic workforce planning’ for district nursing and services are ‘not very well coordinated’ in December last year.

At the time, she told Nursing in Practice that has been a ‘vacuum’ around what safe workloads for district nurses should look like. But she hoped the ICNO standards should support nurses in escalating issues with employers, and employers to do the same with commissioners.