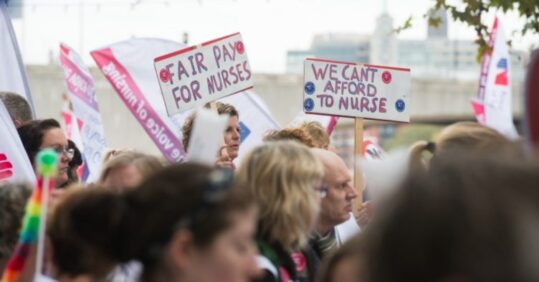 The RCN has announced a ‘summer of action’ protesting the 3% NHS pay award for England and Wales, including a potential vote on industrial action.

Demos, rallies and vigils will be held across the UK against the 3% uplift announced last week, which the RCN says is a pay cut because the Treasury expects inflation to be 3.7%.

The RCN will also hold a consultative ballot on the views of its members in mid-August to mid-September. If enough members are unhappy with the award, an indicative ballot may follow to see if members would in principle take industrial action.

However, the College has underlined that industrial action is a last resort that will only take place if negotiation with the Government and formal disputes with employers fail.

Events in the ‘summer of action’ include a demo in Hove, a candlelit vigil in Norfolk, a virtual rally and a campaign van travelling through Wales. It will culminate in a demonstration in Liverpool ahead of the RCN’s annual Congress in September.

The calendar of events also comes as a poll of 1,691 Brits commissioned by the RCN last week found 51% think it is too little, while 62% say there are too few nurses to provide safe care for patients.

RCN chief executive Pat Cullen said the 3% award ‘will not be enough to prevent an exodus of exhausted NHS nursing staff and ministers must now be honest about the impact this would have on patient care’.

The RCN has calculated that an experienced nurse with at least seven years’ experience – at the top of Agenda for Change pay band 5 – with a current salary of £30,615 will receive £31,533 from this award. If it kept pace with inflation, the award would be £214 higher at £31,748.

Ms Cullen continued: ‘Hospitals and other parts of the NHS are struggling to recruit nurses and healthcare support workers. The Government has been warned that many more are on the verge of leaving.’

‘This [pay deal announcement] is light on detail. It must be fully-funded with additional monies for the NHS and ringfenced for the workforce bill,’ she added.

Although the Government announced a one-off review of workforce trends this month, umbrella groups have said workforce should be looked at annually. They also questioned why the Health and Care Bill, introduced to Parliament last month, did not require HEE to look at workforce planning annually.

Unions vowed last week to consult members on whether to strike following the pay deal.

The GMB union said it was consulting its members on the pay deal and would recommend they say ‘no’ to accepting it. Unite is also consulting health members on the next steps ‘with a range of options on the table, including a consultative ballot for industrial action with the option to strike’.

Meanwhile, the Welsh Government last week announced a 3% pay deal in line with England. The Government in Northern Ireland is yet to announce its decision.