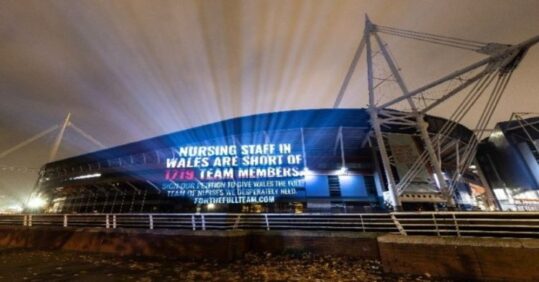 RCN Wales has projected images of statistics showing the scale of the nursing shortage onto landmarks, in what it described as a ‘direct message’ to the Welsh Government.

The campaign, which began on Monday night, includes iconic building across Cardiff – including the Senedd (the Welsh parliament), Principality Stadium, Cardiff Central Station and University Hospital of Wales – to ‘expose the harsh reality of nursing staff shortages’ to both politicians and the public.

The nursing body is also urging the public to sign a petition demanding the safe staffing levels act – which was introduced in 2014 and outlines how to calculate appropriate nursing levels on inpatient wards in hospitals – is extended to community and mental health nursing.

The message projected onto the buildings reads: ‘Nursing staff in Wales are short of 1,719 team members. It’s time to give Wales the full team of nurses we desperately need’.

This figure is an RCN estimation of nurse shortages from May 2021 as the Welsh Government does not publish national vacancy figures for nursing staff, unlike in England. The figure also may not show the entire vacancy picture, because of limitations in the data available, the RCN said[CS1] .

RCN Wales said it has also calculated that shortages in the country mean nurses need to work 34,284 hours of overtime every week to care for patients.

And to further raise public awareness, it has produced a minute-long online video explaining the necessity of a full team of nurses through the analogy of a rugby team, featuring the voice of former Welsh rugby player Eddie Butler. This will launch during Autumn internationals later this month.

Richard Jones, RCN Wales board chair, said: ‘Every day, nurses work tirelessly to take care of people, but we need to start taking better care of them.

‘Research has shown that poor nurse staffing levels can increase mortality by up to 26% – and there are 1,719 nursing staff vacancies in Wales. This means there aren’t enough nurses to provide the most safe and effective care for patients. Without a full team, lives may be put at risk.’

This comes the same week the NMC has raised concerns the number of nurses from within the UK on the register is not growing fast enough to meet rising demand.