‘Vulnerable children at risk with sharp rise in domestic violence’ 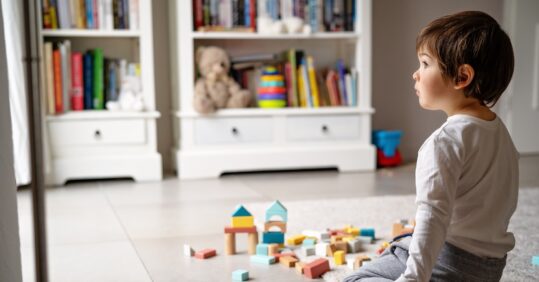 Health visitors fear a tragedy in their areas with the vast majority reporting soaring domestic violence and abuse, an Institute of Health Visiting survey published today has found

Just over half (56%) raised concerns that they were only able to focus on what feels like ’the tip of the iceberg of unmet need’, with other families going uncontacted, while a third said they felt so ‘stretched’ they fear ‘a tragedy in our area at some point’.

Deputy executive director at the Institute of Health Visiting (iHV) Alison Morton warned ‘we cannot knowingly overlook’ the needs of babies and young children again after they were ‘largely invisible in the first wave of the Government’s emergency plans’.

She continued: ‘With a growing body of evidence, we now know that many children are being harmed by the secondary impact of the pandemic.’

In addition, health visitors reported caseloads well beyond the optimal maximum of 250 children: 65% said they were responsible for over 300 children, 29% for over 500 children and 12% over 700 children. One even said they had a caseload of 3,000.

Three-quarters reported increased levels of work-related stress as a direct result of working longer hours (70%) and feeling demotivated (38%), with 34% saying they would leave health visiting if they could because of stress.

Nine out of ten (89%) health visitors also felt the shift to virtual contacts during the pandemic was not as effective as face-to-face work. The report warned: ‘This will leave many vulnerable babies and young children invisible to services and without the support that they need.’

‘Whilst children were largely forgotten in the first wave of the pandemic, with the justification being that we did not know what the impact on them would be – this is no longer the case,’ it added.

Head of policy and campaigning at the Parent-Infant Foundation Sally Hogg said the report ‘paints a worrying picture of increased risk to babies and widening inequalities’.

She continued: ‘Despite the hard work of many passionate and skilled professionals, depleted services across the country are not resourced to provide the support that many families so desperately need.

‘Our babies are our future, and their needs must be taken seriously. Government cannot ignore this issue any longer, investment is urgently needed, and action is long overdue. Babies can’t wait.’

Health vising services were reduced during the first wave of the pandemic. In April, an iHV review found  that in some areas between 50% and 70% of health visitors were sent to work elsewhere.

Health visitor numbers in England have plummeted in recent years, falling from 10,309 in October 2015 to 6,621 in August 2020, the latest figures from NHS Digital show.

The iHV found in January that quality of health visiting service is based on a ‘postcode lottery’ rather than needs, with some areas offering better support for families than others.