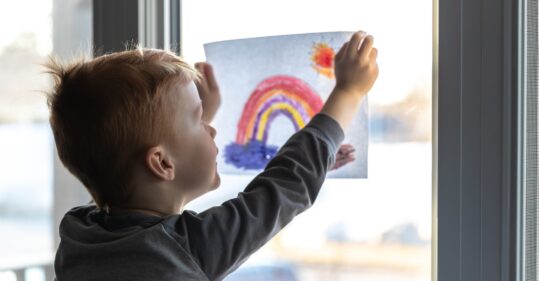 Children under 16 made up just 1% of Covid-19 cases in the first peak of the virus in England, despite accounting for 19% of the population, a study has found.

The Public Health England research showed just 1,408 children were diagnosed with coronavirus between 16 January and 3 May, out of 129,705 tests.

The study authors said the findings provide further evidence for the ‘limited role of children in the pandemic’.

They continued: ‘Consistent with other countries, children account for a very small proportion of confirmed cases and have very low case-fatality rates.’

Children were also less likely to receive a positive result from a Covid-19 tests than the general population, with only around 4% of those tested found to have the virus (1,408 out of 35,200 tests).

This is in stark comparison to the general population where a quarter of people tested received a positive result (129,704 out of 540,305 tests).

The paper added that the number of deaths among children between January and May in England was not higher than expected compared to the same time period in the previous four years.

In comparison, it is estimated that there have been 46,380 excess deaths occurring among adults in England and Wales between March and May.

The first confirmed Covid-19 case involving a child was reported on 29 February, with cases in children beginning to increase in mid-March and peaking on 11 April before declining

The study comes after Boris Johnson said getting all children back to school in England full-time from September is the ‘right thing for everybody’.

Schools closed in March to try to prevent the spread of Covid-19, with only vulnerable children and those of key workers able to attend.

The PHE study used data from NHS England and PHE test results plus those carried out at 300 general practices.

Earlier this week, scientists warned that maternity workers should be regularly tested for Covid-19 after finding more than a third of staff in two London maternity units were unaware they had been infected.

Earlier this month, a study found that frontline healthcare workers with adequate personal protective equipment are still three times more at risk of testing positively for Covid-19 than the general population.