GP practices sent ‘repurposed bin bags’ to use as PPE 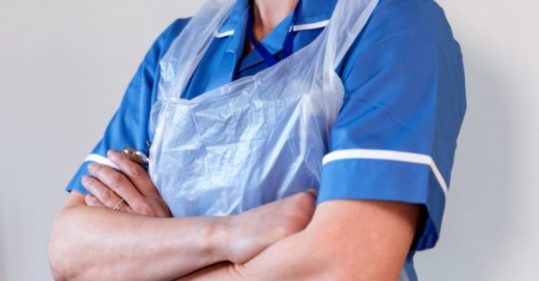 GP practices in Scotland have been sent ‘official’ PPE aprons made from ‘repurposed bin bags’.

They expressed concerns that these may not meet infection standards and would prove unsafe for staff.

Nursing in Practice‘s sister title Pulse has approached the Scottish Department of Health and Social Care for comment.

She questioned whether the bin bags would meet infection standards, adding that both sizing and doffing the aprons were problematic and suggesting that GPs were left feeling ‘undervalued’.

Dr Hadden today shared an image of the box that the ‘aprons’ came in, showing a label faintly reading ‘white tint polythene bags’ covered over with another saying ‘white aprons’.

She said: ‘Label on the box confirms these are polythene bags. Evidently modified badly in some batches with uneven “shoulders”. They also cannot be doffed safely. Crucially important.’

In another tweet, Dr Hadden claimed the bin bag aprons had been ‘sent to GPs all over Scotland’.

Glasgow GP Dr Margaret McCartney said she too was ‘wearing a repurposed bin bag as PPE’.

And Highland LMC secretary Dr Iain Kennedy confirmed that his Inverness practice was another to receive the bin bag aprons, however he suggested they were as good as other PPE aprons.

He said: ‘They are a bit undignified (and tight at the shoulders) but probably do the job as well as the other ones.’

The BMA in Scotland today made a statement saying it is ‘urgently’ bringing the issue to the attention of the Scottish Government and GP and Chief Medical Officer for Scotland Dr Gregor Smith.

It said: ‘We know this has caused concern to those who have received this PPE. We are urgently bringing this to the attention of the @scotgovhealth and @DrGregorSmith to seek the clear assurances in line with the commitment made by the Govt. to address any concerns we have over PPE.’

In March, Nursing in Practice revealed that GP practices had been supplied with expired face masks that have concealed ‘best before’ stickers – however the Government swiftly claimed they were ‘safe to use’.