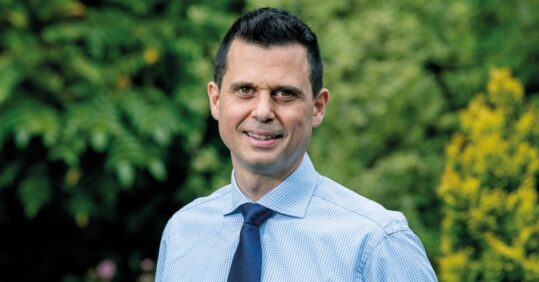 Nurses are often organising, managing their own practices, and setting up clinics and services, as well as vaccinating

Like all nurses, Mark Radford’s job has been transformed by Covid-19. Talking with Nursing in Practice via video from his home, the Health Education England chief nurse and deputy chief nursing officer for England tells Mimi Launder about one of the toughest times of his career.

While practice nurses got to grips with virtual consultations, and community nurses were redeployed to entirely new healthcare settings, Mark Radford had to get his head around his own radically evolving role – one he had only just taken on permanently when the pandemic began to take hold. He was confirmed as Health Education England’s chief nurse in March last year, after carrying out the role on an interim basis since October 2019. During his time in post he has already overseen rapid, revolutionary changes to nurse education, with students nearing the end of their course asked to join the paid workforce to help tackle Covid-19, and others told they had to undertake more academic work online. On top of this HEE role, Mr Radford was asked to head the workforce and training strand of the national vaccination programme, led by NHS England and NHS Improvement.

And, like the rest of us, he found life outside work changed too. Unable to travel abroad, the keen mountaineer is obviously missing climbing as he often posts stunning pictures of peaks from around the world on Twitter. While the actual Alps and Pyrenees may be beyond reach, he – along with the rest of the nursing world – has had plenty of mountains to scale at home.

Mr Radford, who has experience as a consultant nurse in emergency and trauma care, was asked to help lead the workforce element of the Covid vaccine pilot programme in October last year. He helped oversee months of work, culminating in the moment 90-year-old Margaret Keenan was given the world’s first Pfizer-BioNTech Covid-19 jab in Coventry, on 8 December last year.

‘Initially it was a pretty small team leading the national programme delivery for the NHS, but it rapidly expanded over a few months,’ he says.

That team recruited and organised training for vaccinators, making the most of existing nursing expertise in general practice and community teams to deliver mass vaccination programmes. But it also enlisted thousands of volunteers to support the effort, and introduced a change in legislation to allow registered healthcare professionals, such as paramedics and physiotherapists, who do not normally vaccinate, to do so. The team also gathered evidence from suppliers and manufacturers to set up distribution systems, negotiating obstacles such as the need to store the Pfizer vaccine at around -70 degrees Celsius, and early limitations on supply. And it found sites to deliver the jabs, from village halls to the more grand venue of Salisbury Cathedral. ‘It was a pretty astonishing and intense period,’ Mr Radford recalls.

Primary care nurses have been key to getting the country vaccinated as fast as possible, he stresses. ‘From the outset, we absolutely understood that primary care would be delivering the bulk of vaccinations. They do this year in, year out – and the nurses are often organising, managing their own practices, and setting up clinics and services, as well as vaccinating. I’ve always been really clear on public platforms  and social media about recognising the nursing contribution alongside physiotherapists, for example, scientists, doctors and others as part of that work.’

But how did it feel to be at the centre of such rapid changes? ‘I’ll be honest in that, without a doubt, this has professionally been one of the toughest parts of my career,’ says Mr Radford. ‘My job changed enormously pretty much overnight with whatever the pandemic threw at us, so I’ve had to be dynamic around dealing with different types of problems and changes to the team.

‘The demands of work and the physical amount of work to do has just been enormous – but so has the drive to improve and get things better for people out there working in clinical practice, and for our students.’

‘All the time I was working on the national vaccine programme, I was still connected back into HEE supporting my nursing team, because much of what we were still doing was really quite critical, notably in the support of students,’ continues Mr Radford, who was previously chief nursing officer at University Hospitals Coventry and Warwickshire NHS Trust. ‘Students have been amazing throughout this pandemic. They really have. They’ve been a central part of the NHS response.’

In March last year, HEE invited students in the final six months of their pre-registration programme to take up paid placements to support the Covid-19 effort. Likewise, second-year students or those in the first six months of their final year were told they could spend up to 80% of their hours in a paid clinical placement. First-year students who opted out had clinical placements reduced or paused. This set-up was withdrawn in September 2020. But in the wake of the Covid-19 surge earlier this year, final-year students were again mobilised to join the response. The latest HEE figures show more than 28,000 student nurses and midwives had been drafted in as of July 2020.

These heightened expectations of students have had consequences, admits Mr Radford. ‘We’ve had quite significant disruption to their training. For some students, that has been a positive experience, but for others not so.’

HEE conducted a survey of 9,799 nursing and midwifery students in May 2020, which Mr Radford says revealed anxieties around finances, progression on their course and completing hours, and what they experienced during the pandemic ‘which for some was quite traumatic’. For example, 59% of respondents overall expressed concern about catching up with academic studies, while 37% of student nurses (out of 8,397) said they were considering leaving for reasons including stress and a lack of support from their university. ‘The demands and pressure on NHS and social care staff have been enormous, [and] students, they’ve been in those clinical environments themselves.’

But HEE is working with the Department for Education, universities, students and student leader bodies to tackle issues such as mental health and disrupted training. ‘For example, we had a number of students last year who weren’t able to go into placement because they were shielding and so were delayed in qualifying,’ says Mr Radford. ‘We’ve been working with institutions to make sure they can get their hours up so they get their academic assessments done.’

Likewise, universities are helping students access mental health support and ‘address any underlying challenges their experiences during the past 18 months’ will cause them. The NHS has also set up regional mental health and wellbeing hubs that students can access while on placement.

Mr Radford is concerned Covid-19 may worsen attrition rates. Research from the Health Foundation in 2019 put the average nursing student attrition rate in the UK at 24%, citing reasons such as finances, academic issues, workload and lack of support. ‘At the moment, we aren’t seeing any evidence to suggest that’s the case,’ he says. ‘But I’m mindful this will evolve over the next year or 18 months. So we’ve got to make sure we’ve got a very firm handle on it.’

Mr Radford believes this is an opportune time for change. ‘There has been a lot of flexibility and change in nursing teams up and down the country. Some aspects of that are absolutely just for the pandemic, yet there are other areas where we’ve seen real innovation. I think it’s a really important inflection point. Now is the time to think, okay, we’ll start looking and examine what changes we should take forward.’

The rise in long Covid cases calls for the development of specialist nursing roles, he says. Recent data from the Office for National Statistics suggest more than a million people in the UK are living with long Covid symptoms. Mr Radford reveals that he and England’s chief nursing officer Ruth May are working with NHS England on new approaches to long Covid, and nurses will be ‘front and centre’ of this. He also says HEE has been looking at the sizable feedback received from student groups, about what worked well and what didn’t in the pandemic. ‘For example, we’ve done work around support for simulation training during an undergraduate nursing programme – and have had a lot of feedback from university students that developing and enhancing blended simulation learning is a real opportunity.

‘We’ve got high-fidelity simulation suites [where students can use lifelike mannikins in realistic patient environments] up and down the country, which are being used more and more in terms of training and education. But we’ve also got online environments, where people are able to go and see wards and other types of facility online, which helps orientation.’

There have been changes to allow for more simulated training during the pandemic. In February this year, the NMC announced that up to 300 of the 2,400 clinical practice hours student nurses need to complete during their degree could be done in a simulated environment. In March, the Department of Health and Social Care backed this move with an immediate boost of £15m towards the expansion of simulated learning.

Other changes, unrelated to the pandemic, are also on the horizon, Mr Radford says. In January, HEE started testing its first ever blended-learning degree programme in seven UK universities ‘where clinical hours are completed locally but most teaching is through a university that may be miles away’. The programme is aimed at people with caring commitments or other barriers to study, whom a traditional nursing course may not suit. ‘I think we’ll see more innovation in undergraduate curriculum design and delivery,’ he adds.

What’s more, the NMC has also been seeking views on shaking up undergraduate education, which could impact on everything from required hours to the length of programme, as the UK no longer needs to apply EU law on nursing and midwifery education programmes. ‘A lot of students have asked quite rightly why so many hours need to be completed. Does it create pressure? Or does it mean they just complete hours for the sake of it – and actually we can have a better learning experience with reduced learning hours?’

But whatever the future holds for education and vaccines, and whatever mountain looms next, Mr Radford takes a moment to look back at the peaks already conquered: ‘I know how hard nurses have worked under extremely difficult circumstances. Without nursing, we could not have run our health and social care system. Our staff have gone way beyond in terms of hours and their personal commitment. In some cases, sadly, staff have died as a result of exposure to Covid-19. My thanks to each and every one of them.’

‘Prior Covid-19 infection may not give long-term protection’

2Patients to be offered health checks during vaccinations