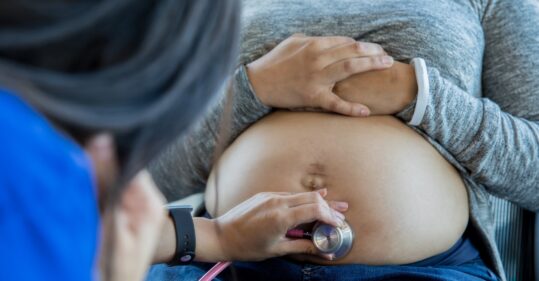 Test maternity workers regularly for Covid-19, scientists have urged, after finding more than a third of staff in two London maternity units were unaware they had been infected.

Researchers at University College London (UCL) discovered 36% of 200 maternity workers in two London hospitals tested positive for Covid-19 antibodies, but had been asymptomatic and did not know they had posed a risk to patients and colleagues as they did not receive a test.

In addition, more than half (59%) of those who tested positive did not have a cough or fever. Many continued to care for patients as they did not have symptoms or meet the Government’s criteria for self-isolation at the time, as it did not include a loss of smell until 19 May (anosmia).

‘Regular testing of staff, including asymptomatic staff should be considered to reduce transmission risk,’ the research authors wrote.

‘Serological testing to assess the extent of seroconversion in a population plays a vital role in containing an infectious outbreak.’

The study, published in the journal Anaesthesia and carried out between 11 May and 5 June, warned: ‘Our study suggests that extreme caution is advisable in maternity settings, particularly the consistent use of effective personal protective equipment.’

They looked at two maternity units – one at UCL Hospital and the other at St George’s Hospital.

The 200 members of staff tested for Covid-19 antibodies included 40 anaesthetists, 108 midwives and 52 obstetricians.

Of these positive tests, as well as the ten (36%) who were completely asymptomatic, 21% reported a fever, 36% reported a cough and 52% reported anosmia.

Overall, 29 workers tested positive – a similar prevalence to that seen in the Greater London population of around 14.5%.

The study noted that most research showed frontline workers were more likely to contract the virus than maternity workers. They suggested that maternity staff appeared to have a lower risk of occupational viral transmission than other healthcare staff because pregnant women may be more likely to be asymptomatic and have milder symptoms.

‘It may be reasonable to extrapolate that asymptomatic individuals infected with SARS‐CoV‐2 pose a lower transmission risk to others,’ the report explained.

The study comes after research published in the journal Nature in June suggested that more than 40% of people with Covid-19 show no symptoms, looking at the experience of an Italian town called Vò.

Earlier this month, a study found that frontline healthcare workers with adequate personal protective equipment are still three times more at risk of testing positively for Covid-19 than the general population.

In May, a Royal College of Nursing survey found that BAME nursing staff struggle more than their white counterparts to access PPE.

Read more: PHE advice on how to put on and take off personal protective equipment