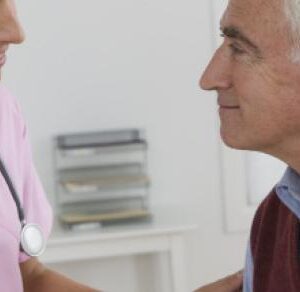 For the last few decades the only way nurses could carry out an ABI was with a hand held doppler device. The procedure takes time to carry out and involves a lot of skill in order to obtain an accurate reading.

Later this month I will be giving a speech to The League of Friends. They recently granted funding for our tissue viability team at Nottingham University Hospitals NHS Trust topurchase two medical devices that perform an automated ankle brachial index (ABI).

For the last few decades the only way nurses could carry out an ABI was with a hand held doppler device. The procedure takes time to carry out and involves a lot of skill in order to obtain an accurate reading. Patients have to rest for half an hour prior to the procedure and leg dressings have to be removed to probe the foot pulses, all considerations that eat into the community nurses’ busy schedule.

Our own team often have to block out an afternoon to conduct this procedure on patients. When I first learned about this device, I thought, this is going to be a ‘must have’ for the team.  It’s amazing how quick and easy it is to carry out an ABI using this device. Not only that, this device also detects if a patient has atrial fibrillation (AF). I had no idea when purchasing the device that it also detected this condition in patients. When I first used the device on a patient who was known to have AF, it alarmed and flashed a screen icon of a heart telling me the patient had AF. As we all know, AF goes undiagnosed in 50% of patients and is associated with deadly and debilitating consequences such as heart failure, stroke and death.

Although this device is fantastic, when I used it on a patient the other week I had an overwhelming feeling of redundancy. All I have to do when carrying an ABI using this device is to put the arm and leg cuffs on and press a button. The procedure was over in 10 minutes.

BBC news recently had a week of discussion on artificial intelligence and robots, and how jobs are becoming automated. One such article on the internet invites viewers to type in their job to see what the probability is that their job is likely to become automated by robots. I typed in the word nursing. The result came back as 354th out of 366 jobs least likely to become automated. The result told me what I knew already that my job would not be replaced with a robot, but some of the tasks and skills we carry out as nurses are becoming automated. Will there be a future where tissue viability nurses become redundant because wounds will be healed in minutes rather than weeks, and where patients don’t get pressure ulcers?

We are already heading in this direction with the use of negative pressure to speed up wound healing and beds that turn and virtually levitate patients to relieve pressure. As much as I welcome these advancements, we need to ensure they don’t dehumanise our relationships with patients. I remember never liking the time when manual sphygmomanometers were replaced by automated ones. Using a manual one involved communicating with your patient: it involved touch, eye contact and getting an intuitive sense as to whether your patient needed to be monitored closely. I sometimes feel that as good as new technology is, we are at risk of losing the professional intimacy we have with our patients.