Blog: The e-cigarette – friend of foe? 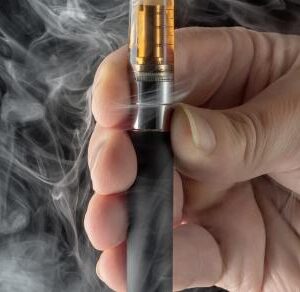 Stopping smoking can be difficult and “Stoptober” is quickly approaching (1st October 2015 – England). Evidence suggests that stopping smoking for one month increases the chances of quitting for longer.1 With similar stop smoking initiatives in Scotland, Wales and Northern Ireland, I thought it might be useful to stimulate some discussion on electronic cigarettes or e-cigarettes as they are often referred to when discussing stopping smoking.

The average cigarette contains over 4,000 harmful chemicals, and approximately 70 of these carcinogenic and nicotine components contribute to the addiction or craving aspects of cigarettes.2 Smoking is also associated with chronic obstructive pulmonary disease (COPD) and lung cancer.3 Indeed smoking is one of the major causes of lung disease both globally and nationally.4 However, advances in products to support the “soon to be ex-smoker” to quit have been developed and are widely available commercially and through health services. But what is really known about electronic cigarettes and what are their effects on health? What does their use mean for both the electronic cigarettes smoker and the passive e-smoker?

Electronic cigarettes come in a variety of different devices with many of them mimicking the physical act of smoking without the combustion of tobacco. The main constituents being the solution by volume, in addition to nicotine (when nicotine is present), propylene glycol, with or without glycerol and flavouring agents. Electronic nicotine delivery systems (ENDS) have grown in popularity among smokers, as they can be used in places where smoking has been prohibited.5 Nicotine may not be a carcinogen, but it can have adverse health effects when pregnant, can contribute to cardiovascular disease and may be associated with neurodegeneration.5 Most ENDS products show varying independent scientific testing with limited empirical studies. How much nicotine an ENDS user inhales depends on device, mixture and frequency and the depth of “puffs” on the device.

Putting nicotine to a side, there is evidence to support that chronic inhalation of toxicants in the aerosol of such ENDS products may produce short term health effects, such as eye and respiratory irritation due to exposure to the propylene glycol.5 Given that supportive research into the future potential of carcinogen concerns around such products may not be seen for many years to come, due to the slow onset of some diseases.6 The potential cytotoxic effects of the solutions used in electronic nicotine delivery has been an area of public health concern, for some brands of devices the carcinogenic effects of the aerosol, e.g. formaldehyde being equal to that of a cigarette.7 There is also concerns surrounding bystander inhalation or passive “vaping” and background particle inhalation of toxicants.8

The role of e-cigarettes maybe one shrouded in controversy and “evidence based practice” of their role in smoking cessation for nurses working in primary care limited. Evidence does seem to suggest that the role of electronic cigarettes can be less harmful than tobacco smoking,8 as they are not inhaling tobacco and the carcinogenic substances in traditional cigarettes. However, their impact on the non-users environment, indoor nicotine passive inhalation and future is still one of further scientific research. Especially if their overall efficacy as smoking cessation product is to be matched against growing public health concerns.

In England the electronic cigarette licensing process is being reviewed and advertising and labelling of such devices could come under further scrutiny.9 From 1 October 2015 it will be illegal to sell e-cigarettes and e-liquids to someone under 18 years of age. Private vehicles must be smoke free if enclosed and if there is more than one person present and one of them is under 18.10 Interestingly, this does not apply to e-cigarettes! Will power alone is often not enough to stop smoking, but if that could be bottled in the run up to Stoptober – it would be a marketable commodity indeed.