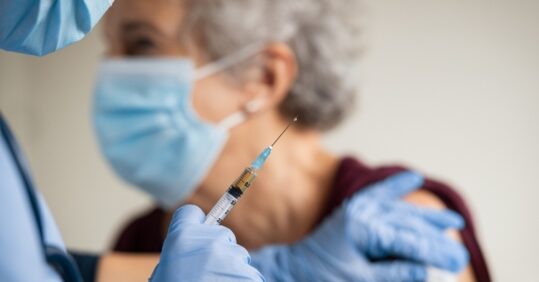 General-practice-led vaccination teams are ‘on track’ to offer the Covid-19 vaccine to all care home residents by this Sunday, NHS England has said.

The body said it expects to offer all elderly care home residents the first dose of the vaccine by the end of January, as promised by Prime Minister Boris Johnson earlier this month.

A spokesperson told Nursing in Practice: ‘Just a few weeks after the Oxford vaccine – which allows teams to more easily vaccinate in care homes – became available, the majority of care home residents have already received their jab.

‘Vaccinating care home residents is a priority for local GP-led vaccinating teams, who are on track to meet the Government’s goal of doing so by the end of this month.’

On 13 January, NHS England told all primary care network vaccination services are ‘expected to’ administer the first vaccine dose to care home residents by the 24 January by the latest.

Almost two-thirds (63%) of residents had received the Covid vaccine as of the middle of last week, the latest DHSC data shows. Areas including Slough and Manchester have said all their care home residents have received a dose of the vaccine.

Professor Martin Green, chief executive of the umbrella-body Care England, told Nursing in Practice: ‘The vaccination roll out has in the main been a very positive experience. Yes, there have been teething problems, but we are very proud of all the adult social care staff and their colleagues in the NHS working tirelessly to roll the vaccine out to care homes for older people.’

He said although the NHS target of last weekend was not met he hoped Sunday’s deadline was achievable. Although, he warned: ‘We need to be crystal clear that whole home vaccinations do not equate with visiting yet, robust infection control measures and testing will be part of life for a good while.’

Professor Green also called for clarity on the targets for the second dose of the vaccine because ‘we are hearing it is just as important’.

The DHSC spokesperson said: ‘We have been doing everything we can to protect care homes and have placed residents and staff in the highest priority group for vaccinations. By the end of the month, we aim to have offered every elderly care home resident a vaccine.’

Care home residents and staff were placed top of the Joint Committee on Vaccination and Immunisation (JCVI) priority list to be vaccinated. The deadline to vaccinate care home staff is mid-February.

Health and social care secretary Matt Hancock announced yesterday that 78.7% of all over-80s – who are also among the top four JCVI priority groups for a vaccine – have also received a jab.