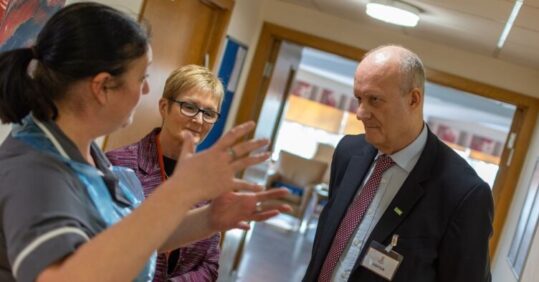 The Government should pay care home providers up to double the normal rate to look after patients who have been dismissed from hospital, social care leaders have said.

Care England, the industry body for the country’s largest care home providers, said that it wants the Government to pay care providers £1,500 a week per person discharged form hospital into adult social care.

Professor Martin Green, chief executive of Care England, cited the need to pay workers more and hire rehabilitation specialists so that patients can be safely dismissed into community care.

The suggested rate, £1,500, is approximately double the fee that most local authorities currently offer for care home beds. An amount which Professor Green suggested was ‘inadequate’.

This comes amid growing political pressure to clear hospital beds taken up by patients who cannot be discharged due a lack of social care availability. There are currently an estimated 13,000 people occupying beds in England who are considered to be medically fit to discharge.

Today the health secretary Steve Barclay announced ‘up to’ £250m in funding to speed up hospital discharge. Some of this funding will the allocated for nurses and other community based clinicians to help support patient’s recovery in the community.

However, Professor Green said that without an increasing to the rate paid by local councils, care providers would be unable to hire enough staff to meet the increased demand on their services.

‘It needs to be at least £1,500 a week,’ said Green. ‘You need to bring in more staff to manage people’s recovery patterns and you may need to separate the discharged residents out in a separate unit,’ he said.

Mike Padgham, managing director of St Cecilia’ Care Group and chair of the Independent Care Group, told Nursing in Practice that ‘social care staff deserve better pay as shown in a recent report which highlighted an £8,000 pay discrepancy between them and their NHS counterparts. The NHS and social care sector both need to be funded properly so that staff are recognised and rewarded adequately.’