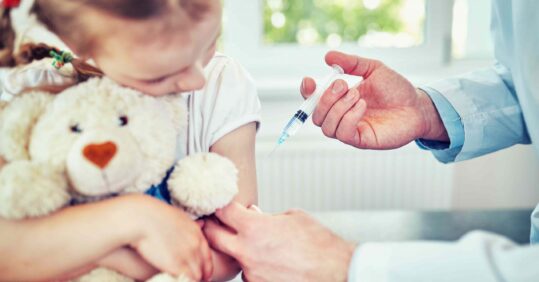 A new report by the National Audit Office found that NHS England missed vaccination targets for nearly all preschool vaccines in 2018/19.

All but one of the vaccines that are recommended for children of preschool age had below 95% uptake in England, according to the investigation – the optimum coverage level recommended by the Department of Health and Social Care.

It suggested that the dismantling of primary care trusts in 2013 may have contributed to the drop in vaccination uptake, as vaccination appointment call/recall requirements for GP practices were not clearly laid out by NHS England, leading to inconsistencies in practice across the country.

The report also suggested that under-served communities, including travelers, recent migrants and some religious groups, who struggle to access healthcare services in traditional ways, contributed to the falling rates.

Prime Minister Boris Johnson said earlier this year that the role of ‘local immunisation coordinators’ must be strengthened in order to encourage hard-to-reach groups to vaccinate, following news that the World Health Organization had rescinded the UK’s ‘measles-free’ status.

NHS England said in response to the report that it hoped the introduction of PCNs would help with access, as they could offer more evening and weekend appointments for patients. NHS England also said that it would look at how payments to GPs, particularly for the MMR vaccine, could help boost uptake.

RCN professional lead for public health Helen Donovan said that it was ‘alarming’ that England had once again missed the 95% target.

She said: ‘For nurses, the findings of the report are all too familiar as they are often the healthcare professionals grappling with a fragmented public health system, which doesn’t support everyone working together to ensure children receive their vaccinations.

‘There isn’t only one barrier to increasing vaccine uptake, as the report says, but not having enough nurses makes it more difficult to make strides in other areas.

‘Instead of focusing on kneejerk reactions to this crisis like mandatory vaccinations, for which there’s no sound evidence, the health secretary should make clear how he will reverse the record nurse vacancies across England which are making the job of nurses working in vaccination even more difficult.’

The news comes as official figures released by NHS Digital in September showed that coverage of all 13 childhood vaccinations fell over the last year.

Health Secretary Matt Hancock said earlier this month that there was a ‘strong argument’ for compulsory preschool vaccination.