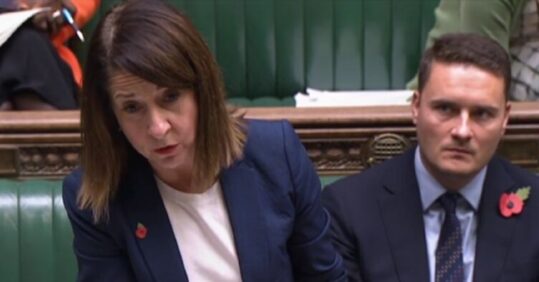 The Government has been challenged over reports that it has failed to pay out the promised £500m discharge fund to help get medically fit patients out of hospital and into care homes or their own home, as promised by previous health and social care secretary Thérèse Coffey.

Liz Kendall, shadow minister for health and social care, today challenged the Government to explain why NHS leaders have said that none of the discharge fund has been paid out to trusts and care homes as had been promised.

This comes after the NHS Confederation said NHS leaders are ‘yet to see a single penny’ from the fund or receive any official detail on how it will be allocated, with leaders warning that local services will struggle to put the investment to good use the longer the delay continues, and primary care and ambulance staff will be expected to pick up the slack in absence of adequate support.

Ms Kendall told Parliament: ‘The previous health secretary promised £500m social care discharge funding for this winter, but it is 1 November and not a single penny of that money has been seen.

‘I’m afraid that the political chaos and incompetency that we’ve seen over the last few weeks means that local services can’t properly plan and thousands more elderly people are trapped in hospitals when they don’t need to be.’

Ms Kendall asked the Government to commit to releasing the funds and to the fact that it would be genuinely new funding, not made up by cuts in other areas

The discharge fund had formed a key part of Ms Coffey’s plan to free up thousands of hospital beds ahead of the winter and was supposed to be paid to care homes and providers of domiciliary care.

However, it has care homes and NHS trusts have since reported that they have not received any of the money that was promised.

Responding to the questions, minister of state for health and social care Helen Whately said: ‘I absolutely acknowledge the problem with discharge’. She added: ‘I am just a few days into this job. I am looking to make sure that we allocate this money effectively because we know that money is tight, and we must absolutely make sure that every penny of this funding is well spent.’

Nadra Ahmed, executive chair of the National Care Association, said that the Government’s failure to provide this social care funding ‘creates a relationship which remains untrusted’.

Mr Ahmed added: ‘We currently face an enormous crisis in social care due to the lack of investment in it. We want to build up our resilience post Covid and be able to create sustainable solutions for the future of social care for those who need it, when they need it.

‘This funding would enable areas to set up strong robust solutions to enable safe discharges with a workforce that feels valued. A fund that is announced to address these issues will be invaluable to the sector.’

Recent data released by skills for care showed that vacancies in social care are rising, and that an estimated 480,000 additional workers are needed by 2035 to keep pace with demand.

Mike Padgham, chair of the Independent Care Group, told Nursing in Practice that ‘it would be very disappointing’ were the government to fall through on their promises of funding.

He said the funding ‘would have allowed providers to recruit more staff and to pay a better gate so that we can help care for people in their homes and in care homes so that they can be discharged from hospital.

‘The turmoil at the centre of Government has delayed things more than should have happened. The sector has got the worst of the winter coming up and we’ve got to make sure there’s sufficient funding for the front lines to function effectively. At a time when social care needs real help, the Government is focussed on other things,’ he added.