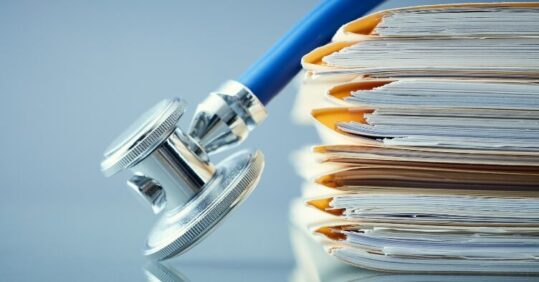 The Government is considering ‘mandating’ access for patients to their GP records and data in England, as is done in the United States, it has announced.

The Department of Health and Social Care’s (DHSC) final data strategy, published today, said the Government is ‘looking at how we can make it easier for patients to access their own data and GP records, including mandating access as they have done in the United States’.

As of April last year, health organisations in the United States are required to share medical records with patients electronically and for free.

It remains unclear what exactly would be mandated and what this would mean for general practice, although Nursing in Practice‘s sister publication Pulse has approached the DHSC for further details.

However, the DHSC also today indicated that patient access to GP records on the NHS App is again delayed until November, following rumours it would launch in July this year.

It said: ‘We will improve access to GP records in the NHS App by giving patients access to their latest health information (November 2022).’

The DHSC strategy also confirmed that patients will be able to ‘share information about their sleep or physical activity from wearable devices’ to their GP via the NHS App, as revealed by the draft plan in June last year.

Meanwhile, the Government admitted in the document that it had made a ‘mistake’ when it tried to re-launch plans for mass patient data sharing last year.

It said: ‘In the summer of 2021, we made a mistake and did not do enough to explain the improvements needed to the way we collect general practice data.’

It added: ‘Not only did we insufficiently explain, we also did not listen and engage well enough. This led to confusion and anxiety, and created a perception that we were willing to press ahead regardless.’

Government-commissioned review lead Professor Ben Goldacre previously said that trying to re-launch the data sharing programme last year was ‘a mistake’ before a ‘trusted research environment’ had been guaranteed.

NHS Digital is currently analysing results from a survey of GP practice staff about their views on digital data.

Speaking today at the HealthTech summit, health and social care secretary Sajid Javid said: ‘We will improve trust in data, which is the currency that data-driven technologies need to function.

‘We will work with the public, including people working in health and care, to develop a new pact on data, which will set out how we will use health and care data, and what the public has the right to expect.’

He added: ‘This will include the ability to opt out of sharing data because although we know that most people want their data to be used for good, we will make the opt-out system simpler and more transparent.’

NHS Digital had announced in October that patients whose practices use TPP would be first to have access to new entries in their GP notes through the NHS app from December 2021 – with EMIS practices to follow this year.

But the launch date was delayed until April 2022 for both systems, after the BMA wrote to NHSX expressing its concerns about the timing of the rollout.

It was then delayed again, with NHS England recognising concerns around ‘safeguarding’, but it remained unclear when the launch would finally take place.

Under the plans, patients will not be able to make changes to their GP records at this time, although a Government white paper published in February said that plans were ‘underway’ for patients to be able to access and contribute to their shared care record.

A version of this article was originally published on our sister title Pulse.