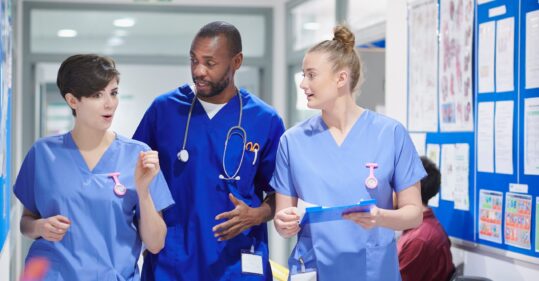 The Government should revisit national responsibilities around workforce, NHS England and NHS Improvement have recommended.

The Government should ‘revisit’ national responsibilities relating to workforce, NHS England and NHS Improvement have recommended.

The bodies have called on the Government to ensure that national responsibilities and duties around workforce are ‘sufficiently clear’ by working with partners including the Royal College of Nursing (RCN).

It comes amid a series of safe staffing campaigns from unions including the RCN, which recently sponsored a petition calling for clearer accountability and enough funding to ensure sufficient numbers of NHS staff.

‘We recommend that the Government should now revisit with partners whether national responsibilities and duties in relation to workforce functions are sufficiently clear,’ said the documents detailing the proposal.

The proposal is part of a set of recommendations for a proposed NHS Integrated Care Bill, a reform intended to speed up implementation of the NHS Long Term Plan.

The bill would ‘free up different parts of the NHS to work together and with partners more easily’, according to the document setting out the recommendations, which follows an engagement process launched in February.

Chief executive of the RCN Dame Donna Kinnair said the College is pleased that the NHS has ‘stated that the issue of accountability for workforce planning and supply remains an area that needs to be resolved.’

She continued: ‘Staff shortages have reached alarming levels with at least 40,000 vacant registered nurse posts in the NHS in England alone with thousands more vacancies in public health and social care.

‘We now hope government will listen to this message as well as the voices of the thousands of members that responded to the NHS England and NHS Improvement engagement process and bring forward this legislation, taking the opportunity to include accountability in government and throughout the health and care system, for workforce planning and supply.’

On the proposal for the Government to ‘revisit’ national workforce responsibilities, chief nursing officer for England Ruth May said: ‘I am grateful, and I support wholeheartedly the recommendation.’

Head of health for Unison, which was also involved in safe staffing campaigning, Sara Gorton told Nursing in Practice that the union welcomed the ‘acknowledgement that a more detailed examination’.

She continued: ‘Workforce planning, training and development are in desperate need of a comprehensive overhaul, one that takes account of the skills and careers of all health workers.

‘Staffing levels will be a key aspect of the discussion, as will workload management, career support and flexible working. Properly-funded apprenticeship routes into healthcare professions and the support provided by administrative and facilities staff are also important considerations.’

• Nurses’ pay must go up along with their status

• Should flu jabs be compulsory for health workers this year?

• Helping nurses cope with bereavement during the pandemic