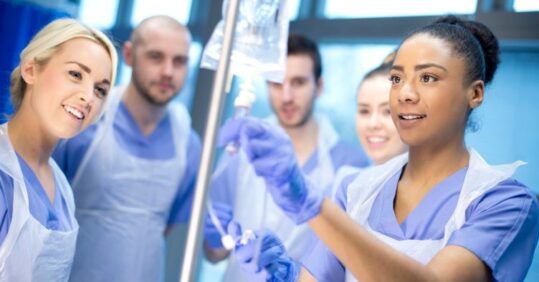 Health and social care secretary Sajid Javid has pledged to recruit 10,000 international nurses in England by April 2022 to help tackle the backlog.

This comes as part of a long-awaited elective recovery plan, published yesterday, which aims to eliminate year-long waits by March 2025 by delivering a ‘massive expansion’ in capacity for tests, checks and treatments, as well as trying to increase workforce numbers.

Speaking to the House of Commons yesterday, Mr Javid said an estimated 10 million people ‘stayed away from the NHS’ during the pandemic and even 50% returning would place ‘huge demand’.

But he promised international recruitment of more than 10,000 nurses this financial year – in particular those experienced in critical care and theatres – as part of the existing commitment of 50,000 more nurses by 2025, as well as 5,000 additional healthcare support workers.

The plan will also:

NHS England (NHSE) also pledged to deliver around 30% more elective activity by 2024/25 compared to before the pandemic, after accounting for the impact of improved care through system transformation and new guidance.

Meanwhile, the NHS said it will offer patients around 17 million more diagnostic tests over the next three years, with more than 100 diagnostic centres expected to be rolled out. As many as 66 of the centres are set to be in use across England by the end of March.

It comes as part of a wider push to boost capacity to deliver more procedures and scans. To this end, NHSE will establish additional surgical hubs focusing on high-volume routine surgery to accompany the 122 currently operating in England.

However, the announcement has drawn criticism for a lack of planning to address staffing crises across the NHS amid concerns about retention because of high pressures on staff.

Shadow health secretary Wes Streeting claimed the recovery scheme ‘doesn’t contain a workforce plan’ to help solve ‘the single biggest challenge facing the NHS’. He said that staff in the NHS are ‘overworked’ and suggested they staff could leave faster than the NHS is able to recruit.

And when asked by Lucy Allan, Conservative MP for Telford, his plans to tackle the staffing crisis, Mr Javid pointed to his previous request that the NHS put together a 10-year workforce strategy.

However, it short of delivering this work, citing that the planned merger between Health Education England (HEE) – the body responsible for long-term workforce planning – and NHSE will see ‘a more co-ordinated approach’ to planning.

In addition, Pat Cullen, RCN general secretary, said: ‘Every response today – from health and care leaders and across the political divide – asks this government to get a grip of workforce planning. It is critical to the safety of patients.

‘The staffing crisis is heavily of their making and they must be accountable for fixing it. Too many of our members are considering their career choice this year and measures to keep them in post, including fairer pay, must be announced at speed.’

A version of this story was originally published on Nursing in Practice sister publication Management in Practice.