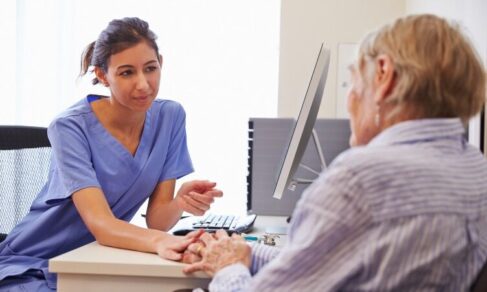 As part of ‘Our Plan for Patients’ the health secretary has committed to cutting GP wait times to two weeks for those that need appointments by increasing the capacity of primary care.

In order to meet these targets Mrs Coffee’s plan promises to free up funding to ‘to widen the types of staff that work in general practice’ including allowing GPs to hire more advanced nurse practitioners.

However, ‘the basic issue, which these plans do not address’, said RCN secretary general Pat Cullen in a response to the announcement, ‘is that we don’t have enough nursing staff.’

Despite the Government being on track to hit targets of 50,000 additional nurses by 2024, the number of vacant nursing positions in the NHS hit all time highs this month with 25,000 leaving the profession last year.

Despite the health secretary’s proposals for improving the NHS, some critics feel like the root of the issue has not yet been addressed.

Alison Leary, professor of healthcare and workforce modelling at London Southbank University, told Nursing in Practice: ‘There really isn’t anything new in this including the mass expansion of volunteers.

‘Much of what is in the plan is already underway such as clinical diagnostic hubs but one important question remains unaddressed-where will the staff come from?’

Addressing the workforce issues that are especially prevalent amongst social care nurses Thérèse Coffey has also promised to make available a fund of £15m to boost international recruitment.

In addition the health secretary has called on the public to take part in a ‘national endeavour’ to support the health and social care system, calling on the one million volunteers who stepped up during the pandemic to support the NHS to come forward again.

The government says that these volunteers could become ‘community first responders or Good Neighbour Scheme leaders’.

In response to this proposal Pat Cullen said that ‘nursing staff provide the majority of patient care and we’re concerned that, when it comes to making care safer, this announcement appears to be lacking.

‘There is a staffing crisis in an overloaded system and it is putting patients at risk. Another callout for volunteers will look panicked and ill-considered.’