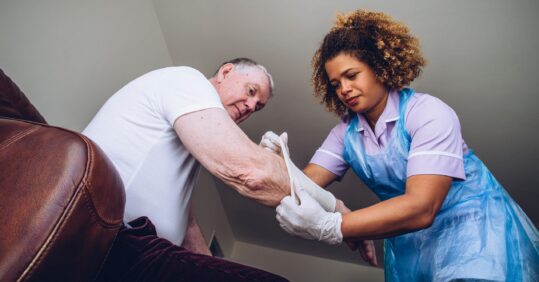 A ‘misleading’ ITV News report that suggested district nurses are unable to see patients during the coronavirus crisis will be ‘corrected’, the Queen’s Nursing Institute has said.

In a segment broadcast last night, care workers told ITV News that they have taken on extra responsibilities because district nurses and GPs are often unable to see patients in the community during the Covid-19 outbreak.

The report faced immediate backlash on Twitter from district nurses pointing out that they still visit patients. ITV News has now said the district nurses report will be ‘corrected’, according to the QNI.

QNI chief executive Crystal Oldman said in a tweet: ‘Have spoken with [ITV News political correspondent] Paul Brand and he will ensure the message is corrected asap.

‘District nurses will be filmed at work to show the 24/7 care for people in their homes continues during Covid-19.’

In the report, political correspondent Paul Brand stated that carers are now ‘covering for others’ at work and that ‘nobody else will go into’ some homes during the outbreak.

John Unsworth, QNI chair and registered nurse, told Nursing in Practice that the report ‘pitted’ district nurses and carers ‘against another’.

‘The reality is that health and social care staff work collaboratively to deliver the care people need in their homes,’ he added.

Mr Unsworth continued: ‘There appears to be fundamental lack of awareness about roles given the suggestion that social carers would act as a substitute for healthcare professionals.

‘Each professional group brings their own sets of skills and knowledge and as we have always advocated it is about the right person with the right skills.’

She continued: ‘The report stated district nurses are refusing to visit patients. This is completely false and misleads the very people we are trying to protect.

‘We are working under extreme amount of pressure and this report has clearly upset many district nurses who continue to battle through,’ she added.

‘This report was not factual and very one-sided and I only hope ITV issue a public apology to all district nurses.’

A specialist practitioner district nurse based in Scotland, who wished to remain anonymous, said they were ‘saddened’ by the broadcast though added that they ‘emphathise with the challenging job carers have’.

They continued: ‘Given most of the media has focused on acute services, I really thought [the report] could be community and primary cares’ time to shine albeit in not great circumstances.’

‘We often feel like the invisible service. But a crucial one in preventing hospital admissions and providing all types of person-centered nursing care at home.’

Nursing in Practice has contacted ITV News for confirmation that the report will be corrected.

A misleading ITV News report that suggested district nurses are unable to see patients during the coronavirus crisis will be corrected, the Queen’s Nursing Institute has said.