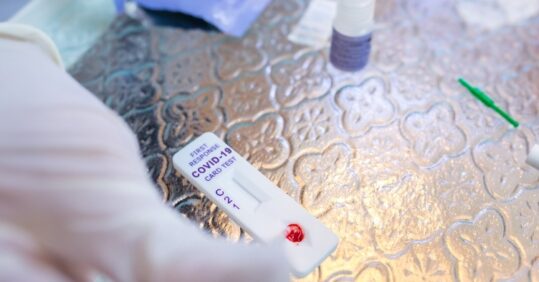 Rapid Covid tests – which have been rolled out for bi-weekly use across health and social care settings – can detect up to 91% of those infected with the virus, a study has found.

Research led by the University of Oxford and Public Health England found lateral flow tests are ‘sufficiently sensitive’ to detect the ‘majority’ of cases that lead to onward transmission of Covid-19.

The team’s modelling found that the ‘most sensitive’ lateral flow test of four kits tested would identify 91% of Covid cases, whereas the ‘least sensitive’ detected 84% of people with the virus.

The accuracy and reliability of the tests has been called into question in recent months, after a mass community testing pilot in Liverpool revealed the tests had missed 60% of positive cases.

But while the authors of the Oxford research acknowledged that the role of lateral flow tests has been controversial, they concluded that the tests can detect most people ‘who would otherwise go on to infect someone else’.

This is because the same people who are detected best by lateral flow kits – those with high viral loads – are also the most infectious, the study found.

‘This is the first time this has been confirmed in a large-scale study and explains part of why some people pass Covid-19 on and others do not. Overall, only six in 100 contacts of infected cases went on to get infected themselves,’ the researchers said.

Tim Peto, professor of medicine at the University of Oxford and senior author on the study, added: ‘We know that lateral flow tests are not perfect, but that doesn’t stop them being a game-changer for helping to detect large numbers of infectious cases sufficiently rapidly to prevent further onward spread.’

The government-funded study examined data from over a quarter of a million people who participated in the UK Government’s Test and Trace programme to determine whether lateral flow tests are sufficient in detecting those who are most infectious.

The researchers concluded that lateral flow tests could be used in conjunction with existing testing to help identify individuals who may not present with symptoms and are therefore not eligible for a test through NHS Test and Trace.

This would mean many of the ‘most infectious individuals’ could be identified earlier ‘potentially preventing onward transmissions and helping to drive reproduction numbers below 1,’ the researchers explained.

Dr David Eyre, who co-led the study at Oxford’s Big Data Institute, added: ‘When the time comes to relax the current lockdown restrictions, by rapidly identifying the most infectious people using these lateral flow tests we can potentially relax the lockdown much more safely.

‘This would allow people to get back to work, school and their normal activities and still stay safe.’

Practice staff should be encouraged to have lateral flow antigen tests twice a week, NHS England said in guidance released in the middle of December. They should also have the tests before going into care homes to administer the Covid vaccine.