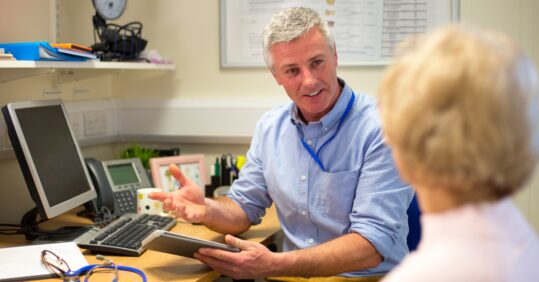 Patients who had longer consultations with their GP were less likely to subsequently self-refer themselves to hospital due to a deterioration of their condition, a study has found.

The study, which looked at factors associated with potentially missed acute deterioration, said this might be because GPs with more time to assess patients ‘are more likely to recognise deterioration and refer the patient for secondary care’.

A longer consultation might also allow GPs more time to provide advice, such as telling the patient to contact the practice again if their condition worsens, the British Journal of General Practice study found.

The researchers defined a potentially missed acute deterioration as a patient having a self-referred admission to hospital after being seen by a GP in the three days beforehand.

They found that 116,097 patients had contacted a GP three days before an emergency admission, with patients with sepsis or urinary tract infections more likely to self-refer.

GP appointment duration was associated with self-referral, with a five-minute increase in appointment time resulting in a 10% decrease on average in the odds of self-referred admissions.

Patients having a telephone consultation compared with face-to-face, previous health service use, and the presence of comorbidities were all also associated with self-referred admission, according to the research.

The study looked at primary and secondary care linked data for a cohort of almost 250,000 patients and aimed to investigate the factors related to potentially missed acute deterioration for all conditions, as well as for four commonly missed diagnoses in primary care: pulmonary embolism, urinary tract infections, ectopic pregnancies, and sepsis.

The researchers concluded that differentiating acute deterioration from self-limiting conditions can be difficult for clinicians, particularly in patients with sepsis, urinary tract infections, or long-term conditions.

‘The findings of this study support the call for longer GP consultations and caution against reliance on telephone consultations in primary care; however, more research is needed to understand the underlying mechanisms,’ the paper said.

It added that increasing GP consultation times may also decrease GPs’ workload overall, and would allow clinicians more time to engage with the national early warning scores, which support recognition of patient deterioration.

The researchers also suggested that the increase in remote consultations seen during the pandemic should be ‘carefully investigated for any unintended consequences’.

Last month, the Royal College of General Practitioners (RCGP) said that remote consultations should not be the ‘automatic default’ for GP care after the pandemic.

A controversial letter sent to general practice earlier this month said practice patients must now be offered face-face appointments if that is their preference, unless they are deemed an infection risk.