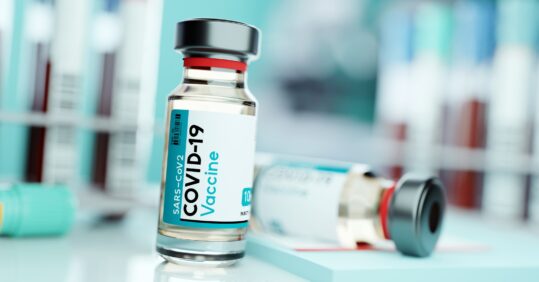 Mandatory vaccination for all patient-facing healthcare staff will be scrapped subject to consultation and parliamentary approval, the health and social care secretary has announced.

In a statement to Parliament last night, Sajid Javids confirmed the Government will launch a consultation on ending vaccination as a condition of deployment in health and social care settings, following ‘fresh advice’ from the UK Health Security Agency and England’s Chief Medical Officer.

He noted the current dominant Omicron variant is ‘intrinsically less severe’ than the Delta variant, which was dominant when the statute was proposed. Additionally, the greater population is now ‘better protected against hospitalisation’ from Covid-19, he said.

When these factors are taken together, the evidence shows the risk of presentation to emergency care or hospital admission with Omicron is approximately half of that for Delta, he added.

Mr Javid concluded: ‘While vaccination remains our very best line of defence against Covid-19, I believe it is no longer proportionate to require vaccination as a condition of deployment.’

And in a letter sent to healthcare services yesterday, NHS England and NHS Improvement acknowledged employers would have set up formal meetings with unvaccinated staff over their deployment. But notices of termination to these employees should no longer be serviced, it said.

It added: ‘We would like to thank all those colleagues who have taken up the offer of a Covid vaccination along with all those who have supported them to do so… NHS England and NHS Improvement have always been clear that staff have a professional duty to do so.’

Care home staff in England have been required to be double-vaccinated against Covid-19 since 11 November, with care providers reporting staff already  leaving because of the policy.

The Independent Care Group (ICG), a care provider organisation, has welcomed the decision but wants to know if those who lost their jobs in November will be able to return to work.

Mike Padgham, ICG chair, added: ‘I think this illustrates the huge gap between NHS care and social care and the way they are treated. We were robbed of thousands of staff back in November when the policy came in for care and nursing home workers and nobody lifted a finger.’

George Coxon, a care home owner based in Devon, told Nursing in Practice that the U-turn was ‘very frustrating but not a big surprise’.

He added: ‘I always try to understand the impossibility of making decisions in these tough and changing times, but the truth is that this policy has been disastrous for social care and care homes – losing so many staff many to the NHS. How can the Government make this right for us?’

Patricia Marquis, RCN director of England added: ‘This climbdown by government has come too late for those social care staff who have already lost their jobs. To risk thousands more nursing staff being sacked in the middle of a staffing crisis was never in the interests of patients’ safety.’

Professor Martin Green, chief executive of Care England, agreed: ‘This policy was imposed upon the care home sector without due consideration or support. Sadly, it has had unintended consequences with staff leaving the sector, some to the NHS, thus exacerbating the pre-existing recruitment and retention challenges leading to disruption to the delivery of health and care services.’

Other healthcare organisations have welcomed the U-turn, but argued the late change to policy has created confusion and has not helped chronic vacancies across healthcare services.

Sharon Graham, general secretary of union Unite, said the ‘needless confusion’ and ‘eleventh hour intervention actually prolongs the stress endured by thousands of NHS staff’. She called for the consultation to be delivered ‘urgently’ to end further ‘agonising uncertainty’ for NHS staff.

Meanwhile, Jon Skewes, executive director for external relations at the Royal College of Midwives (RCM) said: ‘Mandatory Covid vaccination was always a wrongheaded policy and it’s disappointing that it’s taken the Government until the eleventh hour to put the brakes on.

‘I fear that some midwives, MSWs and other staff may already have left because of this policy. We need to see action to encourage their return to the NHS as quickly as possible.’

The U-turn comes after healthcare organisations including the RCN and RCM last month called on the Government to delay the mandatory vaccination plans.