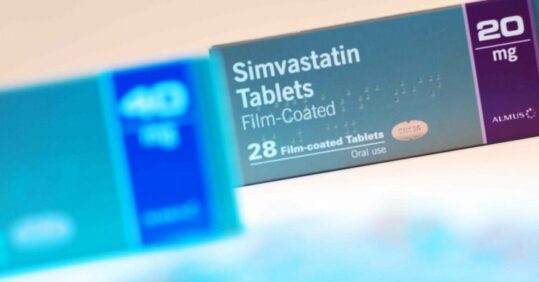 Patients on high-dose statins should be monitored more frequently for osteoporosis, researchers have urged.

Patients on high-dose statins should be monitored more frequently for osteoporosis, researchers have urged.

Research found that patients on statins are just under four times likely to develop osteoporosis than those who are not, and that the risk increases with the dose of statin.

The study, published in Annals of the Rheumatic Diseases, was carried out by researchers in Vienna looked at just over 353,500 patients on statins aged, on average, between 65 and 69. They found that patients on statins were almost four times as likely as those who weren’t to be diagnosed with osteoporosis, with women aged between 40 and 50 and taking statins the most likely group to be diagnosed.

They also found that the osteoporosis risk increased with the dose of statin. Patients on 10-20mg of simvastatin were around a third less likely to be diagnosed with osteoporosis than those not on a statin, while patients on >40-60mg were over 1.5 times more likely. This rose to over three times the likelihood of developing osteoporosis in those on >60-80mg.

Similar increases were observed for atorvastatin and rosuvastatin.

The researchers said that the evidence supported more frequent monitoring for patients on high-dose statins.

They said in the paper: ‘Our data suggest that osteoporosis is overrepresented in high-dosage but underrepresented in low-dosage statin treatment. Guidelines for cholesterol lowering therapies for prevention of cardiovascular complications advise to reduce plasma LDL-cholesterol levels as low as 70mg/dL in high risk populations.

‘We propose that monitoring high-risk patients, that is, postmenopausal female patients under high-dosage statin therapy, might be useful in order to offer an individual therapy to prevent or treat osteoporosis.’

Research published earlier this year showed that half of patients on statins had a ‘sub-optimal’ response, leading to calls from researchers to better individualise statin treatment.